Jose Aldo Fights for His Family 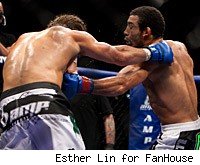 Zuffa has a budding mixed martial arts superstar on its hands in Jose Aldo, the World Extreme Cagefighting featherweight champion who is only 23 years old and has already dominated the best of the best in his weight class. But some have questioned how Zuffa can promote a guy who's not well known among American fans and doesn't speak much English.

So the best thing Zuffa can do is to make sure as many fans as possible know Aldo's personal story, with details about the life like the ones he shares in this Fight Magazine video (after the jump).


"My father had a drinking problem, and sometimes he'd get violent at home," Aldo says. "I was 14 when they separated. That morning, my mother was crying a lot. She was trying to say good bye to us, but we were kids and didn't really understand. When I got back from school that day my mother was gone. That's when I promised myself that I would never drink or hit my wife."

Aldo is now married to a woman he met while embarking on his MMA career.

"I met Vivianne at the gym," Aldo says. "She was training Muay Thai. She fought a few times and I was in her corner. We started talking and getting to know each other and eventually we started dating. I was still living at the favela [a Brazilian term for shanty town] at the time. When she found out where I was living she invited me to live at her house. But her father said he would only accept me living with them if we got married. So we got married."

Aldo credits his wife with helping him get his life on track.

"Before I met her I only thought of fighting," Aldo says. "But after we got together I started having a vision for my life, a life with objectives. Without her, I don't know if I would be sitting here today."

That's a story Zuffa needs to get out to MMA fans everywhere.