Alistair Overeem Clears Air, Will Not Compete at DREAM.15 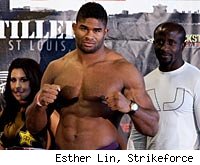 Despite reports to the contrary, Alistair Overeem says he will not be fighting Ricco Rodriguez later this week at DREAM.15.

That's the word from the Strikeforce heavyweight champion himself, who sent MMA Fighting a personal statement, which will hopefully clear the air on the matter.

"I have heard numerous rumors about me fighting at Dream on July 10. I want to give my side of the story before speculation arises:

"After my Brett Rogers fight on May 15, I decided to take time off and do media appearances -- MMA expo in Canada, E3 expo, Strikeforce events -- and enjoy some time off with my family. I knew Dream wanted me on the show, but I didn't want to go back in training preparation. Then, they offered me a fight against Andrei Arlovski for the Dream heavyweight title. As I have said on occasions, fighting for a belt means something more, and I wanted that Dream title so much that So as a result, I agreed to lay off my media and holiday plans, and went back to training.

"During my training I found out that Andrei Arlovski was not going to be my opponent, and they changed opponents numerous times. I've heard names like Tim Sylvia and Minowa. At one point, I received notice that they had found a opponent but that the Dream heavyweight title was not on the line anymore. With all the changes and the title fight no longer a possibility, I simply had to turn down the opportunity.


Share
"The next day, I immediately took a flight to San Jose to hype up my possible fight against the winner of Fedor Emelianenko or Fabricio Werdum. I then heard rumors that Dream had booked me in a fight against Ricco Rodriguez. I want to make it very clear that I never verbally agreed to fight him and I never signed a contract with Dream to fight him. I feel very sorry for Ricco Rodriguez's camp if they still think the fight is on, and I apologize to my fans that have bought a ticket to see me compete. I hope this statement has shed some light on the unfortunate situation."

When MMA Fighting spoke to Rodriguez's agent, Ken Pavia, on Saturday, Pavia still maintained that the fight was a go and all plans were in place for Rodriguez's trip to Japan.

DREAM.15 takes place July 10 from the Saitama Super Arena in Saitama, Japan, and will be headlined by Shinya Aoki vs. Tatsuya Kawajiri for the DREAM lightweight title.