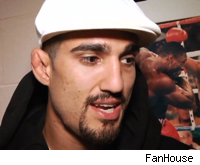 "Da Spyder" weighed on on whether he deserved the split decision win and trying to put together a solid winning streak. He also apologized for controversial remarks he made about Spike TV, which some believed led to him being taken off Saturday's televised prelim special.