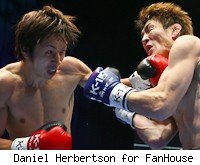 July 5th will be the first K-1 WORLD MAX that is truly without Masato so it is no surprise then that the hunt for his successor is in full force but FEG are indicating that it will not be at 70kg.

The card is a joint event between the K-1 WORLD MAX 2010 70kg GP Final 16 and 63kg Japan GP Final but the 70 kg Final 16 has been split with the majority of the fights to take place in Europe later in the year.

So in this new generation of fighters will we find a Masato? After the break, my preview and predictions.
What: K-1 World MAX 2010 70 kg Final 16 and K-1 Japan 63 kg Finals

Yoshihiro Sato vs Yuya Yamamoto (70 kg World GP Final 16)
Yoshihiro Sato has had a disappointing run since his career high victory over Buakaw Por Pramuk in 2008. Back to back losses to Masato and Artur Kyshenko are excusable but his decision loss to Gago Drago is a fight that he should have easily have won. Also, Sato lost in It's Showtime to Thai fighter Pajonsuk and his schedule clash with Giorgio Petrosyan was scrapped when the reigning champ was injured so he will be looking to get back on track here.

Yuya Yamomoto had his break out year in 2009, proving all the critics wrong and making it to the Final 4 of the World MAX GP, only faltering when he encountered Petrosyan. Yamamoto hasn't been able to back it up in 2010 though and dropped a decision to Hinata in the quarter finals of the WORLD MAX 2010 Japan Tournament. A step down to Krush was successful and he brutally knocked out Scott Shaffer with a high kick to earn his place in this tournament.

Both fighters need a win here, not just to advance to but stabilize their careers in general. Yamamoto's ability to walk through punishment will be fully tested by Yoshihiro Sato and after three rounds, just walking itself may present a challenge due to Sato's leg kicks. Sato should be able to use his experience to nudge out a decision after a classically slow start.
Pick: Sato

Yuichiro "Jienotsu" Nagashima vs Andre "Dida" Amado (70 kg World GP Final 16)
The cosplaying Yuichiro "Jienotsu" Nagashima may be better known for his "otaku" qualities rather than his fighting prowess but in 2010 he is shaking up the Japanese K-1 circuit. Nagashima bounced back from a 1-3 record in 2009 to take the K-1 WORLD MAX 2010 Japan Tournament in March with three KO wins including his final victory over the highly rated Hiroki Nakajima. His unusual angles and slapping punches somehow lead to excellent KO power but his hands are constantly down during combinations and his jaw is famously fragile. Importantly for FEG, Nagashima is just the kind of fighter that is needed in this tournament to inject some Japanese interest post Masato and his time training with the Japanese legend has obviously paid off.

After Andre "Dida" Amado knocked out Hiroyuki Takaya and decisioned Caol Uno K-1 HERO'S in 2007 he looked like a force to be reckoned with in Japan. Since then he has gone 1-5 under K-1 and MMA rules and most recently got outclassed by the returning KJ Noons at Dream.13. Dida was never really rocked by Noons though and his chin and power can keep him in fights despite is shortcomings technically.

Nagashima's glass jaw is always going to be a problem for him, especially against the upper echelon of K-1. Fortunately for Nagashima, Dida isn't there. Nagashima may find himself in trouble if he gets caught as Dida has legitimate power be his impressive run in the Japan tournament should continue here.
Pick: Nagashima

Hiroki Nakajima vs Albert Kraus (70 kg World GP Final 16)
Hiroki Nakajima is the man personally picked by Masato to be his successor (after the Hiroya thing didn't work out) and he was looking good until running into a much improved "Jienotsu" Nagashima in the finals of the 2010 Japan MAX GP. Nakajima lost that fight because got tired and started winging his punches which led to the counter KO. The tournament also showed him to be lacking in the kicking defense but the newcomer's right hand is excellent.

The 2002 K-1 World MAX Champion Albert Kraus was looking like his time at the top was over after a rough 2007 and early 2008. But since May 2008 he has been on a tear and taken out Mike Zambidis, Yasuhiro Kido, Buakaw Por Pramuk and "Jienotsu" Nagashima before running into eventual 2009 Champ Giorgio Petrosyan.

Albert Kraus looks to be back and if he is, Hiroki Nakajima will be no match for him. We still haven't seen enough of Nakajima in K-1 to truly get a feel for his abilities but the holes in his game will easily be exploited by Kraus and a finish in the last round is certainly possible.
Pick: Kraus

Yoshimichi Matsumoto vs. Daisuke Uematsu (63 kg Japan GP Quarter-Final)
In his first round match with Haruaki Otsuki, Yoshimichi Matsumoto was getting outclassed early with punches to the body until he found his range. He then managed to score a down on one of the tournament favorites and took the decision.

Daisuke Uematsu looked shaky early against the "Japanese Killer" Jae Hee Cheon when he got caught with a flurry that sent him falling into the corner. Uematsu quickly rallied though and landed a right cross to the jaw that put the Korean out only 1:09 into the fight.

Matsumoto has a solid chin and Uematsu is quite likely to test it. Uematsu was going into his fight with Cheon on a two fight losing streak and his KO win over Cheon was just the kind of win that he needed to snap him out of it and here, he is likely to continue his winning ways. An early onslaught from Uematsu will put Matsumoto down on the cards and he may rally in the final round but should lose a decision.
Pick: Uemtasu

Yuta Kubo vs. Keiji Ozaki (63 kg Japan GP Quarter-Final)
Yuta Kubo's tactical demolition of MMA entrant Daiki "DJ.taiki" Hata was extremely impressive but we must keep in mind that DJ.taiki is not a stand-up specialist of the same caliber as the rest of the field. The southpaw's round kick to the rib cage was devastating and kicks and knees to the head in close were also effective but his leg strikes are rarely set up with his hands at all.

Keiji Ozaki was perhaps the least impressive fighter advancing in the tournament and even his victory in the first round was a questionable decision. The "Tornado Star" certainly lives up to his moniker but he is really lacking technically compared to the rest of the field. Ozaki showed every technique in the book against Komiyama except the basics and without them, he wasn't able to set up his spinning techniques and so was not very effective.

There should be no surprises here, Kubo will easily handle Ozaki and may manage to stop the taekwondo fighter. The difference in technical ability is to vast. Interestingly, Kubo has been running 20 km a day since the opening round in May. That kind of running regimen is rarely employed by fighters and it will be interesting to see how it works for him.
Pick: Kubo

Naoki Ishikawa vs. Kizaemon Saiga (63 kg Japan GP Quarter-Final)
Naoki "Naokick" Ishikawa was one of the early favorites in the tournaments but his decision win in the opening round over an opponent with only four fights under his belt was not overly impressive given the experience difference. "Naokick" obviously excels at kicking and his hands are a real weakness. His tendency to paw out constantly with his jab can lead to him getting countered but his ring control and footwork generally keep him out of trouble.

As much as the world loves to love Fire Harada, he was not a serious opponent for Kizaemon Saiga. Towards the end of the first round Saiga already dropped his hands and throughout the fight was toying with Harada but when he was trying to put him away in the final round, he wasn't able to.

Perhaps the hardest fight to call in the 63 kg division. Both fighters are kick specialists, Ishikawa a Muay Thai stylist and Saiga a karateka. Saiga's style leads to him missing with a lot of kicks and Ishikawa should make him pay for that but Saiga is more experienced at K-1's breakneck speed and rules and he should be able to edge out a close decision.
Pick: Saiga

Tetsuya Yamato vs. Yuki (63 kg Japan GP Quarter-Final)
Tetsuya Yamato's WMC Muay Thai titles are held in high regard but still, few would have picked him to win over tournament favorite Masahiro Yamamoto. The pressure that Yamoto applied in the third and extension rounds in the bout with Yamamoto were extremely impressive and he was rewarded with two downs and the victory.

While Yuki scored one of the few KO's in his first round bout he was actually not that impressive in doing so. "Kyoken" Yuji Takeuchi was handily winning their bout with straight punches until he got caught with the high kick. The KO may be telling of his true ability though. Yuki read Takeuchi's rhythm perfectly. Takeuchi was dropping his hands slightly after every combination and Yuki timed his kick just as the hands dropped. While he was not impressive through the fight, this glimmer of genius may be telling for Yuki.

Yuki is not on the same level as Masahiro Yamamoto but there is added pressure on Yamato to back up his performance in the opening round. Given Yuki's lack of defence and Yamato's excellent pressure fighting he should be able to get the decision victory with his hands.
Pick: Yamoto

63 kg Japan GP Semi-Finals and Final
If my predictions are correct then we will have Daisuke Uematsu vs. Yuta Kubo and Kizaemon Saiga vs. Tetsuya Yamoto as our semi-finals. Out of those matches Kubo should be able to avoid the power shots to take out Uematsu and Yamoto will handle Saiga who will have a rough time in his quarter final match.

Yuta Kubo is a step above the competition here and his style is perfect for tournament fighting. Tatsuya Yamoto should be meeting him in the finals but will fall short in a decision after a stellar run. Even is some of my predictions are wrong, I still like Kubo to take the tournament.