Brock Lesnar 101: What Did We Learn About UFC Heavyweight Champion? 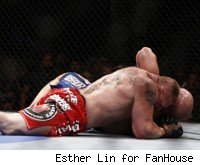 OK, so maybe that's not exactly how Brock Lesnar's team drew it up. Odds are they didn't plan to have their fighter take a beating for the entire first round just to tire Shane Carwin out. If they did, Lesnar should fire his trainers and hire people with a little more regard for keeping his blood on the inside of his body.

But despite the rough start at UFC 116 on Saturday night, Lesnar showed a lot of grit in lasting through the early trouble to submit Carwin with a second-round arm triangle to retain the UFC heavyweight championship.

Beyond just providing a frantic few minutes worth of entertainment, the fight also gave us the chance to learn a little bit more about the man who may be one of the best fighters we've seen the least of in the cage. Below, five of the most valuable lessons gleaned from Lesnar's latest title defense.

1. He can take a punch, but he's not immune to them
When you have a neck like Lesnar's -- which is to say, when you don't have much of a neck at all -- you have a biological advantage that allows you to absorb punches more easily than the average man. Even so, Carwin rocked Lesnar early on and had him doing the chicken dance in the first round. That tells us that Lesnar is just as knockout-able as any mortal. The fact that he survived that near-finish to come back strong just a few minutes later, well, that tells us that whoever wants to beat him with strikes is going to have to do it via accumulation, and they'd better pace themselves better than Carwin did.


Share
2. He knows his way around a submission
He's not going to win any no-gi grappling championships, but Lesnar sure looked surprisingly comfortable slapping an arm triangle on Carwin and then patiently tightening it for the finish. That tells us that he knows at least one submission move, and that he's confident enough in his skills to go for it right away when he sees the opening. Lesnar was dangerous enough when you just had to worry about him taking you down and hitting you with those cinder blocks on the ends of his arms. Now that he's got a little jiu-jitsu in his arsenal, he has two ways to threaten you on the mat.

3. He learned both heel and face moves in his pro wrestling days
If the chorus of boos every time he shows up on the screen didn't clue you in, Lesnar has a talent for alienating people. Maybe it's the crew cut. Maybe it's the way he spits his words into the mic, making it sound like he's cutting a WWE promo even when he's thanking God. Whatever it is, he's always come off as a guy who would rather eat people than be around them. And yet, he managed to sound humble and not at all abrasive in his post-fight remarks, even avoiding the temptation to threaten his wife with sexual intercourse this time around. Almost makes you wonder if this is a calculated face turn. Or, more likely, a genuine personality change brought on by a serious illness.

4. His stand-up game is still a major question mark
Lesnar may have spent only a few brief minutes on his feet in his whole MMA career, but he hasn't looked comfortable for very many of them. His long arms and enormous fists were enough to carry him when he was fighting smaller or slower fighters, but that won't work against everyone. He's too easy to hit, has too many holes in his defense, and one gets the sense that a quicker, more explosive striker with good takedown defense (Cain Velasquez, perhaps?) could really exploit that weakness if he doesn't fix it fast.

5. He might not be the best fighter, but he's the best-biggest
I realize that probably looks like a typo, so let me explain. Skill-for-skill, Lesnar is not so awe-inspiring. If he were a 6-foot, 240-pound heavyweight, he probably wouldn't be champ. Instead he'd be a great wrestler with unpolished striking skills and questionable taste in tattoos. But since he is so very big and so very strong, while also possessing surprising agility and speed for his size, he dominates smaller heavyweights. In other words, Brock Lesnar is champ in part because he was born Brock Lesnar. That doesn't diminish his accomplishments one bit, but it does make you wonder what would happen if an even bigger, stronger, faster new kid moved into the neighborhood. If Lesnar had to win on technique alone, without major physical advantages, could he do it? Since we may or may not ever get the chance to find out, maybe the better question is, does it even matter?
.fanhouseButton {margin:2em 0;} .fanhouseButton a:link, .fanhouseButton a:visited, .fanhouseButton a:hover, .fanhouseButton a:active {background-color:#dd2829;color:#FFFFFF;font-size:18px;padding:0.3em 0.6em;text-decoration:none;} .fanhouseButton a:hover {background-color:#000000;}
Follow Us on Twitter Friend Us on Facebook