UFC 120: Battle of Unbeatens Hathaway vs. Kim; Diabate vs. Gustafsson 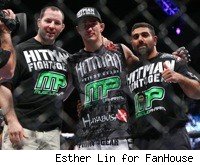 Two more fights have been verbally agreed to in the rapidly developing UFC 120 event.

Fast-rising welterweight star John Hathaway returns to the octagon against Dong Hyun Kim in a matchup of unbeatens, while Alexander Gustafsson will take on Cyrille Diabate in a light-heavyweight bout.

Sources have confirmed to MMA Fighting's Ariel Helwani that both fights have been verbally agreed to.

The 22-year-old Hathaway has surged towards the front of the UFC's 170-pound division with four straight wins, including a breakthrough win in a dominant decision over Diego Sanchez during May's UFC 114. He's 14-0 overall.

Kim (13-0-1, 1 no contest) has four wins and one no contest in his UFC run, also earning a victory at UFC 114 with a decision against former Ultimate Fighter winner Amir Sadollah.

The rangy, 6-foot-6 Diabate recently made his UFC debut with a first-round TKO over Brazilian striker Luiz Cane. Diabate is 17-6-1 in his career.

Gustafsson recently suffered his first career setback, dropping to 9-1 with a first-round submission loss at the hands of blue-chip prospect Phil Davis.

UFC 120 takes place in London's 02 Arena. A welterweight bout between former No. 1 contender Dan Hardy and Carlos Condit is also in the works, along with a heavyweight tilt pitting power striker Cheick Kongo against unbeaten American Travis Browne.