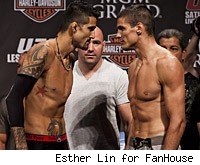 This is the UFC 116 live blog for all four of the untelevised preliminary bouts in support of tonight's UFC 116 pay-per-view at the MGM Grand Garden Arena.

Round 1: Vemola quickly shoots in for a takedown. Madsen stops him and lands a few knees to the face. As they break, Madsen scores with a right. Vemola shoots again to no avail. They clinch against the fence, with Madsen throwing a few knees to the legs. Vemola tries to break free but Madsen smothers him until ref Mario Yamasaki breaks them. Vemola shoots in again. Denied again. Another clinch against the fence. After a period of inaction, they're restarted again. Madsen pulls Vemola down with a minute left. He works from half-guard. Vemola effectively defends, but the round goes to Madsen 10-9.

Round 2: Vemola tries a throw but Madsen stops it and takes him down in the opening minute. Madsen works from half-guard again. Vemola doesn't let much through, but neither can he get up. Madsen keeps him pinned against the fence with little room to work. The crowd is growing restless as we dip under two minutes remaining. The ref stands them up at the inactivity. Vemola wings an overhand right that misses wildly. A clinch ensues but Yamasaki restarts them shortly thereafter. Another clinch to end it. Round goes to Madsen 10-9.

Round 3: Vemola's striking can best be described as wild. Not much technique behind the arm punches and Madsen has no problem avoiding them. After a short exchange of misses, another Madsen takedown follows. Madsen is winning the wrestling match on points. Vemola looks for a kimura as the halfway point passes. He gives it up shortly. The crowd is thin at this point early in the night, but even the diehards have little appreciation for this. Madsen advances to half-guard with 1:20 left. While in north-south, Yamasaki breaks them up. Madsen goes right back to the clinch. Vemola tries to jump into a guillotine, but no dice. Another restart with 10 seconds left, but no time for Vemola. Madsen takes the round again, 10-9 and likely sweeps.

Round 1: Roberts scores a takedown in the opening minute. Petz tries to wall-walk upright and does get back to his feet. After some cautious standup, Roberts ducks down under a right hook and takes Petz down again. Quickly, Petz is back to his feet. Roberts moves in for another takedown and secures it. This time, he moves to side control, then quickly to mount. He transitions to Petz's back with a minute left. He looks for the rear naked choke. Roberts just can't duck his arm under Petz's chin though, and Petz survives the round. Still, the round goes to Roberts, 10-9.

Round 2: Petz starts stronger in round two with some kicks, and he stuffs Roberts takedown try. Roberts follows up with a single leg and puts Petz on his back with three minutes left. Petz tries to get to his feet but Roberts deftly takes his back with 2:20 left. Petz works free, turns over and ends up on top. They get back to their feet and Petz drills Roberts with a right. Roberts looks winded from trying the sub. Roberts tries for a takedown and gets it, right into side control. You could see Petz shake his head at losing the momentum. Petz back to his feet and slams Roberts down. Roberts tries a guillotine but it's not close. Very close round, but MMA Fighting gives it to Petz 10-9.

Round 3: Petz looks like the fresher of the two in the last round. He connects on leg kicks from the outside. Roberts is the one moving forward, but Petz is landing. He wobbles Roberts with a left hook at 2:30. Roberts shoots inn a few seconds later, and again, he puts Petz down. Roberts moves to half-guard and scores with short elbows. Petz works to get upright but Roberts keeps control of his legs. Roberts sneaks into full mount with 30 seconds to go. Petz defends well, but the round has to go to Roberts, who probably saved the judges a tough decision by taking this round since round two was so close. MMA Fighting scores it for Roberts 10-9.

Round 1: Long feeling-out process between the two until Harris throws the first punch 50 seconds in. Grazing left. Harris starts walking Branch down, but Branch fires off a left high kick that earns some cautious respect. Harris misses with a right and Branch smiles at him, then showboats and lands a left. Harris fires off a left that lands, then misses badly on a follow-up. Branch has some showman in him. Lots of misdirection and extra hand movement. Harris drills him with a left with 90 seconds left. Harris scoops him up for a slam with 15 seconds left, but doesn't have much time to work anything. Still, he takes the round, 10-9.

Round 2: Harris gets the takedown a minute in. He sneaks in a couple big right hands as Harris tries to defend. Harris postures up and Branch uses the quick moment to get to his feet. They clinch against the fence. Branch tries to fire off some offense but nothing gets through, and Harris takes him down again. Harris catches Branch with a left on the way up. This crowd is waiting to react at anything big, but so far tonight it's been a steady diet of takedowns. MMA Fighting scores the round for Harris 10-9.

Round 3: Branch comes out aggressive with a high kick. Harris goes for the takedown, Branch tries a triangle but Harris slams his way out of it, landing in Branch's guard. Branch gets free and upright moments later. Branch lands a knee off a restart, but Harris moves in for another takedown attempt. Branch tried to jump into a flying triangle but Harris slammed him down and unconscious. Harris easily could have landed another punch but pulled it upon seeing Branch unconscious.

Round 1: The two measure each other early with kicks from the outside. Very cautious on both sides early. A couple head kicks from Reljic miss, Grove is patient. Reljic shoots in for a takedown that he completes with less than two minutes left. Grove drops Reljic with an upkick from his back. That gives Grove enough time to get up. Grove senses he's in trouble and goes after him. He lands a knee but Reljic clinches to give himself time. Grove lands another knee as they break the clinch. Grove gets the round based on the upkick and powerful knees, 10-9.

Round 2: Reljic wobbles Grove early with a left, but Grove secures a takedown seconds later. Reljic uses an oma plata to reverse position and ends up on top. Reljic stands back up but quickly gets back into Grove's guard. Reljic has a problem getting off offense inside Grove's long guard, but occasionally manages an elbow or punch. Nothing of any real consequence though. Meanwhile, Grove lands a few elbows of his own from the bottom. With less than a minute left the ref restarts them. MMA Fighting scores the round for Rejlic 10-9.

Round 3: Grove comes out aggressively with a nice combo as Reljic retreats. Grove with another nice combo as they settle into a standup round. Well, I spoke too soon. Reljic goes for the takedown. Grove threatens with a guillotine, and Reljic eats a knee on the way up. Reljic clinches for a takedown, and Grove feeds him a flying knee for his efforts. Reljic stays with the clinch against the cage and eventually drags him down. 70 seconds left. Reljic passes into side control with 40 seconds left. Then he moves to north-south, but needs to do something as position isn't going to win him the round. Grove stays active and breaks free as the round ends. MMA Fighting scores it for Grove 10-9. Close fight.