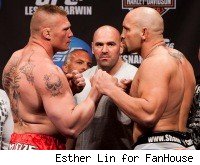 I can break down the UFC 116 heavyweight championship match between Brock Lesnar and Shane Carwin stylistically (in fact, I'll do just that), but that's not going to really determine who's better. One man could be superior than the other in every category but one, but if the latter can use that one big weapon to better effect, that might be all he needs to win. Such is the case of heavyweight fighting, when one big punch could supercede everything that comes before it.

Lesnar, a shade over 6-foot-3 and right around 265 pounds, is coming off a one-year layoff due to diverticulitis that has been discussed ad nauseum. Lesnar's tired of talking about it, reporters are tired of writing about it, and there's not much more than needs to be said about it. But while he's undoubtedly healthy following the serious illness, the layoff itself has to be considered a possible factor in the bout.


Share
Historically, fighters who miss more than eight months of action before returning for high-profile fights lose. We've seen it recently in a number of cases: Quinton "Rampage" Jackson, Chuck Liddell, Patrick Cote, Renzo Gracie, Andrei Arlovski, Dan Henderson. They all went down in their first time back after a long layoff. Exactly why it happens is unclear, but the best argument seems to be that you can't exactly replicate real fight conditions in the gym. You can spar, but there's headgear. You can wrestle, but maybe your partner is only going 75 percent. You can look loose and fluid in your striking, but maybe things tighten up when the lights are shining brightest and everything counts for real.

Whatever the case, returning from a long layoff at this level is an attempt at bucking the odds, and Lesnar (4-1) has to try and do it against a guy who's been firing on all cylinders.

More: UFC 116 Weigh-In Video | UFC 116 Pictures | UFC 116 Results
Carwin is riding a wave of momentum. Just under 6-foot-2 and cutting down from 275 pounds, the interim champion smashed through former title-holder Frank Mir at UFC 111 in March. It was his 12th first-round stoppage in 12 pro fights.

It's no secret that Carwin tends to overpower opponents with his striking, particularly his boxing. According to Compustrike, Carwin's landed 47 percent of his punches over his last four fights. Ironically, when he came into the game a few years ago, he felt so uncomfortable throwing his hands that he didn't even want to shadowbox. Yet now people feel it's his most likely route to becoming arguably the best heavyweight fighter in the world.

Carwin's power comes from his legs. You don't get a true sense of how muscular they are seeing him on television. His legs are like mighty oaks planted into the ground, a perfect start for the kinetic chain of punching. As he's gotten more comfortable with striking, he's only gotten better, which explains why he could fold Gabriel Gonzaga with one punch and drop Mir with short punches from the clinch.

Lesnar, meanwhile, is built more top-heavy, with a broad back that could double as a wide screen. A natural athlete, he took to MMA quickly, utilizing his NCAA Division I national championship background as a base for his career.

This time out, though, Lesnar will apparently be making a major tweak to his game. He'll be fighting southpaw.

The change was apparently made after consultation with his new boxing coach, Peter Welch, but it can serve a two-fold purpose. First, it gives Carwin a look he wasn't expecting. Many right-handers struggle against southpaws. And second, it gives Lesnar a slight advantage in his wrestling, as his power leg is one step closer to shooting on Carwin for the takedown.

Though it seems a curious time to make a change, perhaps it was brought about in hopes of increasing his effectiveness in the standup department. According to Compustrike, he's landed only 27 percent of his standing arm strikes over his four UFC bouts, and has actually been much more effective with kicks (he connects on a 71 percent clip there).

There are some, though, who think Lesnar's revelation is a ruse. He keeps a super-secret training camp, so why give away a major tactical change in the final days before the fight? Is it a head-game? We'll have to wait to find out.

But the other questions are many: What if Lesnar can't take Carwin down - Does he have a plan B? What if Carwin can't stop the takedown - What's his route to victory then? Can Lesnar take Carwin's best punch? Carwin's never been out of the first round - will his conditioning hold up in such a big moment?

All we know for sure is Lesnar is going to want to take the fight to the ground -- he's been successful on eight of 11 takedown tries in his UFC career -- and Carwin's going to try to keep things upright. Whoever wins that little battle within the battle moves much closer to victory. As a former Division II national champion, Carwin is no slouch in the wrestling department, so Lesnar's probably facing his toughest test in taking down a foe since he beat Randy Couture for the belt. Couture recently spent time with Lesnar in helping him address holes in his game, but it likely wasn't enough time to plug anything of substance.

Carwin needs to stuff that first takedown try and put doubt in Lesnar's mind. If he can do it, momentum should swing his way. If Lesnar succeeds, the pendulum is his.

With the questions surrounding the champion, and a legitimate edge for the challenger in the striking department, I have to lean ever-so-slightly towards Carwin. If anyone is a good enough athlete to overcome the layoff jinx, Lesnar certainly could be that man. But, who really knows? That's why they fight. That's why we watch.