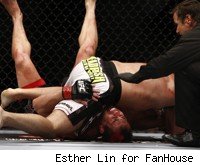 UFC newcomer Ricardo Romero showed off his impressive ground game on Saturday night and forced Seth Petruzelli to tap out on Saturday at UFC 116.

It was a wild, back and forth first round. Petruzelli looked good on his feet in the early going, landing punches and kicks that Romero couldn't answer. Romero tried a takedown early on but Petruzelli stuffed it and stayed on his feet, and he continued to control the fight.

All that fancy striking appeared to tire Petruzelli out, however, and when Romero finally got Petruzelli onto the ground, the nature of the fight changed significantly. Romero -- a former college wrestler at Rutgers -- mounted Petruzelli, got his back and appeared close to submitting him. But then Petruzelli managed to get to his feet, floored Romero with a hard punch, and landed a couple huge double-hammer fists that had Romero badly hurt at the end of the round.

Early in the second round Petruzelli looked good on his feet again, knocking Romero down with a hard knee, but once again, it went to the ground and Petruzelli struggled: He couldn't get Romero to tap with an arm bar, and then Romero managed to get into side control, bend Petruzelli's right elbow in a way elbows shouldn't bend, and forced Petruzelli to tap.

Petruzelli, best known as the man who knocked out Kimbo Slice in the fight that would lead to the downfall of EliteXC, doesn't look like he's improved very much in the three years since he last fought in the UFC. The 12-5 Petruzelli, a former K-1 kickboxer, still has a solid stand-up game, but he doesn't have much of a ground game to speak of, and he's not in very good shape. He might not get another chance in the UFC.

Romero, who's now 10-1 in his MMA career, definitely will be back in the UFC. He needs to improve in the stand-up department, but he showed real promise in beating Petruzelli.