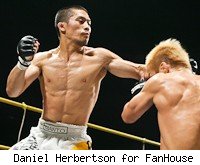 Otuska seemed to control the fight over three rounds with his wrestling and was never in danger on the feet but three of the five judges saw the bout for Matsumoto.

Korean prospect Won Sik Park also had issues with DEEP officials but he does not yet know the result of his match. Park finished Ruki Ueyama with legal soccer kicks towards the end of round one but the bout was stopped due to an apparent illegal knee although DEEP officials were unable to agree if an illegal blow was thrown and thus unable to render a result. Takafumi Otsuka's lack of finishing ability looks to be his undoing. First against Rafael dos Anjos, then against Kazuyuki Miyata and now against Koichiro Matsumoto, the young AACC product has lost split decisions after controlling much of the bout but unable to put an emphatic stamp on it.

Over three rounds Otsuka controlled Matsumoto, took him down and threatened with submissions although strikes on the ground were notably absent. To Matsumoto's credit, he was able to stand after most of the takedowns and submission attempts to do slightly better on the feet but did not assert any real superiority or cause any significant damage. Otsuka controlled probably 80% of the fight but his unwillingness to throw strikes while wrestling his opponent left it up to the judges and three of the five saw for the challenger.

The final judgement call went to Kenichi Serizawa who was also the referee for the contest. Serizawa awarded the bout and the title to Matsumoto. Although having five judges is an excellent idea for title fights, it perhaps would be preferable if it were their sole job.

The bout between Won Sik "Parky" Park and Ryuki Ueyama ended controversially but without result.

Park had not seen action since his loss by way of eye injury to Kuniyoshi Hironoka back in October 2009 in DREAM and looked a little shaky early on against the former DEEP middleweight champion. Jabs from Ueyama threw the Korean off balance and looked to actually daze Park, only being kept up by the ropes momentarily. Park recovered quickly though and turned on his own attack, working kicks both low and high and landing a hard cross. Park caught a kick and swept the supporting leg of Ueyama to put him down and from there he landed three soccer kicks which are legal under DEEP's rules.

Referee Samio Kimura broke the fighters and called an illegal knee although some of the other officials seemed to contest it. With Ueyama unable to recover, DEEP officials not clear on whether and illegal blow was actually thrown and no video replay immediately available, the bout was ended without result.

A decision will be rendered tomorrow after review of the tape.

Tatsunao Nagakura managed to rebound from his first loss against Tomoya Kato but it most certainly wasn't by the way that he hoped. Nagakura and Kato were engaged in a slug fest and a KO seemed to loom but when the fight hit the mat, Kato threw an upkick that hit Nagakura directly in the groin. After a minute to recover Kato threw another kick that again hit Nagakura low. The reformed Rugby player was taken backstage and hoped to continue later in the night but was unable to. Nagakura was "awarded" the DQ victory and Kato picks up his second successive DQ loss by kicks to the groin.