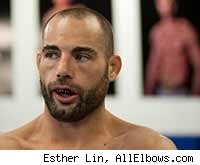 After finishing 10th out of over 2500 competitors in last week's World Series of Poker, UFC fighter Mike Swick must be feeling pretty lucky. Either that, or he was not intimidated by my 0-3 record in Writer vs. Fighter and saw a chance for an easy victory. Whatever the reason, Swick was gracious enough to agree to face me in a UFC 116 prediction contest this afternoon, and for that I thank him.

I may have gotten smoked by "Babalu" Sobral in last week's match-up, but I'm trying to stay positive. I figure it can only help me that I got Swick to make his predictions after he'd stayed up until 5 a.m. playing poker in Las Vegas, where he says he's been doing "very well."

Chris Leben vs. Yoshihiro Akiyama
Swick's pick: Leben via KO. Swick started to go with Akiyama, then paused to more carefully consider his choice, and then decided that he likes Leben's chances to "land that punch." And don't play dumb; you know exactly the punch he's talking about.
My pick: Akiyama via decision. As great a story as it would be for Leben to win two fights in the span of three weekends, I still have to give the edge to Sexyama.


Share
Chris Lytle vs. Matt Brown
Swick's pick: Lytle via decision. Though he respects Brown's aggressive approach and powerful striking, Swick says Lytle's experience will make the difference. "I think he'll fight the smart fight."
My pick: Lytle via submission. I don't think the hard-charging Brown will allow this fight to go to decision, and I don't think that approach will serve him well.

Krzysztof Soszynski vs. Stephan Bonnar
Swick's pick: Draw. In a bold move that's a first for Fighter vs. Writer, Swick says it will end even on the scorecards, but "both of them will look like they got drug by a truck" afterwards.
My pick: Soszynski. He'll pick up where he left off last time, and then Dana White will be forced to give Bonnar a different sort of job in order to fulfill his promise never to fire him.

Brendan Schaub vs. Chris Tuchscherer
Swick's pick: Schaub via...something. Let's just say Swick was a little less than enthusiastic about this fight.
My pick: Schaub via TKO. As long as he doesn't succumb to the takedowns and ground-and-pound, he'll prove too quick on the feet.