War Machine Sentenced to a Year in Jail 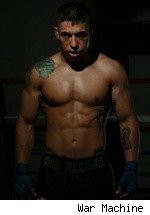 After a tumultuous couple of years filled with nearly as many fights outside the cage as in it, the fighter known as War Machine is headed to jail.

According to an Associated Press report, which incorrectly identified the man formerly known as Jon Koppenhaver as an "Ultimate Fighting Championship competitor" in its opening paragraph (he was cut from the UFC in 2008 following some poorly timed remarks about the death of fellow fighter Evan Tanner), Mr. Machine pleaded guilty to a probation violation and to two felony counts of assault in San Diego on Thursday.

After narrowly avoiding incarceration for his past exploits, War Machine was sentenced to a year in jail and told to report a week after his scheduled bout with John Alessio at Tachi Palace Fights 5 on July 9, according to the report.

When you look back at the last two years worth of legal scuffles and questionable life choices that have kept War Machine in the headlines (choices such as changing his name to War Machine, for instance), it's almost hard to fathom how he's stayed out of jail up until this point.

And yet despite all this carnage, somehow he remained free until his latest run in with law, which came about after he assaulted a bar bouncer in San Diego in March.

While it's a shame to see a fighter who seemed legitimately talented putting his skills to use in the streets rather than in organized competition against fellow fighters, at least he's about to get some time to consider the consequences of his actions as he spends the next year in jail. Let's hope he sees this as the wake-up call that it is and turns things around once he gets out.