UFC's Stephan Bonnar Will Be Back in Booth for WEC 50 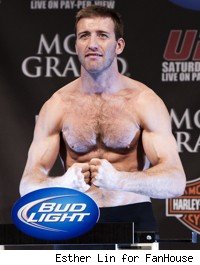 Stephan Bonnar will return to the broadcast table for WEC 50 at The Pearl at the Palms in Las Vegas on Aug. 18.

The UFC light heavyweight told the news to MMA Fighting on Wednesday, and sources close to the WEC have confirmed that Bonnar will be doing color commentary for the event alongside play-by-play voice Todd Harris.

Bonnar first worked color commentary for the promotion at WEC 47 in Columbus, Ohio, in March.

"I love doing it – to get the opportunity to do it is just a blessing," Bonnar said. "I can't believe they called me up to do it, and they liked my performance the first time and they want me back. Whenever they ask me to do it, I'm game."

There has been a revolving door of sorts in the WEC color commentary position. Frank Mir held the chair regularly until WEC 47, when Bonnar took over. Zuffa's regular pay-per-view team, Mike Goldberg and Joe Rogan, did WEC 48, which was called "Aldo vs. Faber" and went without reference to the WEC.

Bonnar said he had the opportunity to do WEC 49 last month in Edmonton, Alberta, Canada, but the event was too close to his fight Saturday against Krzysztof Soszynski at UFC 116. Instead, UFC lightweight Kenny Florian worked that show.

Former UFC lightweight champion and WEC fighter Jens Pulver, who was released by Zuffa in May, had also been a candidate for the commentary gig. But Dana White confirmed to MMA Fighting that he would not be retained for broadcasting following his release.

There has been no announcement for the WEC's long-term broadcast booth plans, but Bonnar told MMA Fighting he is in the mix, along with Florian, depending on their fight schedules. Florian fights Gray Maynard at UFC 118 in Boston just 10 days after WEC 50.

Also likely to be back behind the microphone at WEC 50 is UFC "Voice of the Octagon" Bruce Buffer. He worked his first WEC event on the promotion's pay-per-view debut, then stayed on for WEC 49 last month after the departure of Joe Martinez.