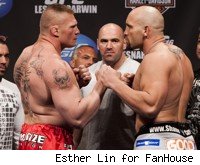 MMAFighting.com has the UFC 116 weigh-in results for all 22 fighters competing on Saturday's card in Las Vegas.

Brock Lesnar and Shane Carwin both registered at the 265-pound limit for their heavyweight championship bout.


As of last week there is no longer an argument for Fedor Emelianenko being the No. 1 heavyweight in the world, and Carwin acknowledged after the weigh-ins the additional prestige the bout carries.

"Tomorrow we find out who the baddest man in the planet is," said Carwin, who captured the interim title bout in March with a first-round TKO over Frank Mir.

Lesnar, who is fighting in his second straight unification bout, is returning after missing nearly a year of action due to a serious case of diverticulitis.

"I'm just excited to get back in the Octagon, it's been a long road," Lesnar said. "That's all I have to say. I'm ready to fight."