UFC 116: Leben Gets a Raise, Carwin Gets (Relative) Peanuts 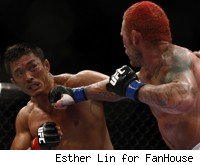 After taking the fight on extremely short notice, Chris Leben is getting more money for fighting at UFC 116 than he got for fighting two weeks ago at the Ultimate Fighter Finale. And if Shane Carwin thinks he's getting the short end of the pay stick on Saturday night, it's hard to blame him.

Brock Lesnar, meanwhile, is making the same base salary for UFC 116 that he got at UFC 100, while Yoshihiro Akiyama -- who's also fighting for the first time since UFC 100 -- will make a little more in base salary than he got last time, but probably a lot less once bonuses are factored into the equation.

That's the basic takeaway from the purses for the four fighters in the UFC 116 main event and co-main event, which were disclosed by Nevada State Athletic Commissioner head Keith Kizer on Friday. More details below.

Brock Lesnar
Show money: $400,000
Win bonus: $0
Lesnar is making the same base salary that he made at UFC 100, when he earned $400,000 to show against Frank Mir but no win bonus. However, while Lesnar's base salary is among the highest in MMA, it doesn't even come close to the total income he'll make for this fight. Lesnar is the sport's biggest pay-per-view draw and will likely make around $2 million in pay-per-view bonuses, and he'll also surely do well in the sponsor department. He probably won't make quite as much for UFC 116 as he made for UFC 100 because the pay-per-view take probably won't be as high, but he'll do very well.

More: UFC 116 Fight Card | UFC 116 Pictures | UFC 116 Results
Shane Carwin
Show money: $40,000
Win bonus: $40,000
If Carwin thinks he's getting the short end of the stick on this, it's hard to blame him. For beating Lesnar he'd make $80,000, and although he'll also make plenty from sponsorships, he has said that his contract doesn't give him any pay-per-view bonus. If Carwin beats Lesnar he'll have a lot of leverage to renegotiate a much more favorable contract, though.