Stephan Bonnar: 'Do or Die' in Rematch With Krzysztof Soszynski at UFC 116 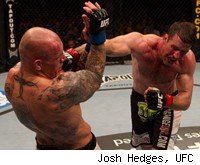 With three straight losses, Stephan Bonnar is feeling the pressure.

Despite UFC president Dana White's statements in the past that Bonnar will always have a home in the organization thanks to his epic battle with Forrest Griffin in the finale of Season 1 of "The Ultimate Fighter," a fourth straight loss would have most fighters staring at a pink slip.

His last setback was a controversial TKO loss thanks to a cut from an inadvertent headbutt against Krzysztof Soszynski at UFC 110 in Sydney. Bonnar appealed that decision, hoping to have the loss overturned to a no contest. That appeal was denied, the loss stood and Bonnar now finds himself in a must-win situation in his rematch with Soszynski on Saturday at UFC 116.

"I don't think (losing the appeal) adds any pressure," Bonnar said. "I already feel a ton of pressure. Every fight I usually do. But this one here, I'm kind of looking at like do or die. I want to be aggressive, throw lots of punches and just do everything I can to win. Usually, the faster the pace of the fight, the better I do. So I'm looking forward to him pushing the pace."

The rematch means Bonnar has been training for Soszynski for the better part of eight months. The light heavyweight said he'll be glad to move on come Sunday.

"I'm getting awfully sick of Krzysztof, I'll tell you that," Bonnar said. "I've just had him on my mind, so it'll be nice to be done with him after Saturday."


Share
When Bonnar and Soszynski ran into each other at UFC 114 in May, with Bonnar's seat right in front of his opponent's, they talked about their rematch and a mutual desire to make an exciting fight. And though Bonnar's fellow Indiana native Chris Lytle fights right after him on the main card and seems to have a monopoly on Fight of the Night bonuses, both Bonnar and Soszynski agreed their tilt could result in some end-of-the-night extra cash.

"We'll see if he's a man of his word, or if he's trying to trick me and looking to get inside for takedowns," Bonnar said. "But yeah, he said, 'Let's put on a show,' and I agree. Last time, it was a good fight and I thought it had potential to be Fight of the Night. That third round could have been epic if we were allowed to finish it. So yeah, I think it has the potential to be that kind of fight. I'm down."

After a two-fight winning streak, Bonnar was penciled in to face Matt Hamill. But a severe knee injury forced him into surgery and rehab. When he returned, he ran into then-rising star Jon Jones at UFC 94 and lost a unanimous decision. And at UFC 100, Hall of Famer Mark Coleman outwrestled him to a decision. The loss to Soszynski put Bonnar in new territory – the first three-fight skid of his career.

To get back back in the win column, Bonnar said he worked with a lefty kickboxer instead of having righties playing southpaw the way he did for the first fight with Soszynski. And knowing Soszynski can take Bonnar's punches, same as Bonnar says he can take his opponent's, he has ramped up his work on the ground, hoping for an opportunity to use his jiu-jitsu game, aided by a significant height advantage, to work for a submission.

"I'm going to take it to him and make it fast-paced," Bonnar said. "I think there's potential for Fight of the Night, but I'm pretty confident in my ground game and confident in my submission defense. I've trained on the ground really hard and confident I can catch him there. I took his best Sunday punches and shook them off (in the first fight). He ain't knocking me out, and I'm not getting tired. I'm going to give him hell."