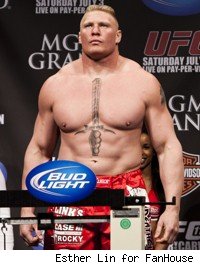 LAS VEGAS -- For the first time, it seems tangible, reachable. Brock Lesnar and Shane Carwin are licensed, weighed and ready to rumble at UFC 116.

After two postponements, an illness and an interim title bout, the two biggest and best heavyweights in the UFC squared off after weighing in at the MGM Grand Garden Arena on Friday night.

First off, let's get a couple things out of the way. Carwin is at least an inch shorter than Lesnar. They looked the same height during the customary face-off because Carwin put his sneakers on beforehand. Second, Lesnar's official weight is indeed 265. While some believe that Nevada state athletic commission rep Keith Kizer motioned 264 and announcer Joe Rogan misspoke, MMA Fighting confirmed with Kizer that 265 is indeed the official weight.

That makes this the first UFC undisputed heavyweight championship match in history in which both competitors checked in at the heavyweight limit of 265. (Carwin and Mir were both 265 for their interim title match in March.) For the first time, though, Lesnar won't be the man carrying the more mass in the cage. While Carwin had to cut about 10 pounds to make the weight, Lesnar only had to miss a meal or two to hit his number.

"Tomorrow, we find out who the baddest man on the planet is," Carwin (12-0) said after the staredown with Lesnar.

Lesnar (4-1) came out to a chorus of boos from the thousands who came out to watch the weigh-ins, looking a bit surprised at the reaction. Carwin was the clear crowd favorite.

In the MGM Grand sports book, the line continues to move wildly. Lesnar was once a 2-to-1 favorite. Current odds: Lesnar -130, Carwin even money.

The rest of the weigh-ins were fairly uneventful, except for the apparent struggles of George Sotiropoulos. Early rumors that Sotiropoulos had weight-cut issues seemed on the mark, as he appeared weak and drawn out, just making the lightweight limit at 156 (non-title fights get a one-pound allowance).

After Pellegrino blew past him on the way backstage, Sotiropoulos walked off slowly, trudging down the stairs in pain. He'll have 24 hours to rehydrate and come back full strength in a pivotal fight among two surging lightweights.