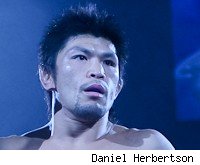 Only one week prior to DREAM.15 we are finally starting to get some more matches, but it looks like FEG are having troubles. Yoshida Dojo fighters Kazuhiro Nakamura and Michihiro Omigawa have officially made the move to DREAM where they will face Karl "Psycho" Amousso and Young Sam Jung respectively. You can be forgiven for not recognizing the name Young Sam Jung. One of Japan's best at featherweight will be facing an 0-2 fighter. Both losses come by first-round KO.

Mitsuhiro Ishida will be making the move down to "featherweight" to meet Daiki "DJ.taiki" Hata and the light heavyweight title eliminator match between Gegard Mousasi vs. Jake O'Brien was made official.

When using the term featherweight with DREAM, one must use caution though. Omigawa rejected DREAM's odd weight limit of 63kg and will instead fight at 65kg and the Ishida vs. DJ.taiki weight limit is still under negotiation.
At Dream.14 only one out of the five featherweight bouts were contested at DREAM's official limit of 63 kg. Bouts were fought from 60 - 65 kg and no two fights had the same weight limit. The 63 kg weight limit, which converts to roughly 139 lb, was initially created for Norifumi "KID" Yamamoto but KID went on a slide in 2009 and last fought at 60 kg (132 lb).

DREAM Executive Producer Keiichi Sasahara commented that in the future they may employ 61 kg and 65 kg divisions but with K-1's new 63 kg division this would create further problems for the MMA fighters that are crossing over like DJ.taiki and Kazuyuki Miyata.

Weight issues are not the only problems within DREAM it seems - FEG seem to be scrambling to fill the card, only managing seven fights at this stage.

DJ.taiki was only offered the fight with Ishida two days ago and the rumored match between Ricco Rodriguez and Strikeforce Heavyweight Champion Alistair Overeem was not announced. K-1's official mascot, K-1 Kuma commented on twitter following the press conference "What happened to Alistair!?"