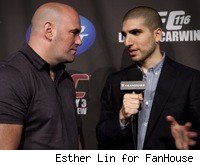 It must be nice to have a memory as pleasantly selective as Dana White's. It's always there when he needs it, and it never fails to leave him feeling like the smartest guy in the room.

Take the recent upset loss that knocked Fedor Emelianenko from the top spot in the heavyweight division. To hear White tell it, he alone saw through the outsized fiction of Fedor, so it doesn't surprise him to see the Russian fall.

"I've been saying that forever, but the media overhyped this mythological creature that they thought was the number one pound-for-pound fighter in the world, which is just so...it's so asinine and ridiculous," he told MMA Fighting's Ariel Helwani in this video interview.

White went on to claim that he "never believed" in Fedor, which seems odd considering all the time and effort the UFC president spent trying to sign him to a UFC contract. It wasn't so long ago that he referred to his attempts to acquire Emelianenko as an "obsession."


Share
That was apparently all a clever ruse, because now White would have us believe that he knew this Fedor guy was a phony all along. And how did he spot this paper tiger when the rest of us were duped? Simple: the lack of quality competition on Fedor's record.

This is White's go-to move when it comes time to talk Fedor. He insists that Fedor isn't deserving of our respect because he doesn't fight the best. Of course, if you asked White to tell you who the best are, it's a pretty good bet that you'd get a list of UFC fighters. That's how it works when you're a fight promoter: the guys you can profit from are the only guys who matter.

Of course, when those guys move on, as Andrei Arlovski did, exiting the UFC on a three-fight winning streak, then they become total nonentities.

Apparently it doesn't even matter that Arlovski added knockout victories over Ben Rothwell and Roy Nelson – the latter of whom is one win away from a UFC heavyweight title shot, according to White – before taking on Emelianenko. The mere fact that he was no longer a UFC fighter at the time seems to have made him worthless as an opponent by the time Emelianenko starched him in the first round.

It also doesn't seem to matter that Fedor was slated to take on Josh Barnett – then a top-five heavyweight – before Barnett's steroid debacle derailed the fight. Nor does it matter that not so long ago Emelianenko was aiming for a fight with Randy Couture – then the UFC heavyweight champ – before White and his team of lawyers put the kibosh on it.

Nope, all that matters is that Fedor won't fight the best. Though since the best are confined exclusively to the UFC, at least in White's mind, that's a little like criticizing Georges St. Pierre for fighting Dan Hardy instead of Jake Shields or Nick Diaz.

That's not to say that Emelianenko is beyond reproach. His record does feature such MMA punchlines as Hong Man Choi and Zuluzinho, with middleweight Matt Lindland sandwiched in there for good measure. And yes, his M-1 Global management team has at times seemed like a barrier between Fedor and the dream fights that fans want to see. There's no denying any of that.

At the same time, one surprising loss doesn't cancel out everything else he's accomplished in the sport. He beat Mirko "Cro Cop" Filipovic back when the Croatian (whose abilities White claims to respect now) was in his prime. He beat Antonio Rodrigo Nogueira twice. Doing so once, and against a declining version of the old "Minotauro," was enough to earn Cain Velasquez an impending title shot in the UFC.

And then there's Brock Lesnar and Shane Carwin, who have about half as many fights between the two of them as Emelianenko does in his storied career. Neither of them have faced the kind of steady diet of high-quality competition that Emelianenko did in his Pride days. At least not yet.

That's not a knock on them. They have, after all, faced the best available to them in the time available to them. But, with the possible exception of the Alistair Overeem bout, which still has yet to materialize, didn't Fedor do the same? Didn't he beat everyone he could possibly get in the ring with, and didn't he at least make an honest effort at getting in the ring with a few others?

The truth is that White is simply following the fight promoter's handbook when he disparages Fedor's claim to greatness. If Lesnar, in some alternate universe reality, were to abandon the UFC right now in favor of Strikeforce, White would immediately turn around and denigrate his accomplishments as a mere 4-1 novice who got half his wins against the likes of Heath Herring and Min Soo Kim.