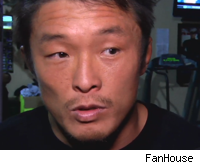 LAS VEGAS -- No one was more disappointed about Wanderlei Silva dropping out of UFC 116 than his scheduled opponent, Yoshihiro Akiyama.

The fighter, who had been campaigning to fight Silva for months, was devastated when Silva dropped out with broken ribs. And he wasn't too happy when the UFC floated Chris Leben past him as a replacement.

In fact, his initial reaction was simple: no. On Wednesday, Akiyama explained why he was displeased by the Leben matchup and why he ultimately chose to accept it.

"I'm very familiar with Chris' popularity in the States, but compared to Wanderlei overseas, [Wanderlei] is a much more bigger name in Korea and Japan," he said through an interpreter. "For me, to improve the popularity of MMA in Japan is one of my goals as well, and to do that, that's a lesser name. That's where I stood."


Share
Interestingly, Leben also had the same reaction to the fight in that he didn't want to do it. It was only 36 hours after his last fight at UFC 115 and he was already being called on to compete. His initial instinct told him there just wasn't enough time to prepare.

"The more I thought about, it became clear, I am a fighter. This is what I do," Leben said. "I've got a limited window of time in this sport. I kind of killed two birds with one stone, two fights, one training camp. And this is a huge-profile fight."

Akiyama and his supporters, though, disagreed. He had long planned to have a large group of friends and family accompany him to the Silva fight. A bout with Leben didn't seem to capture their imaginations in the same way. And while Akiyama said that while his loved ones urged him to make his own decision, "they all kind of said you should withdraw from the fight."

"It was a 50/50 decision," he said. "It just got to a point where I'm not going to do it for myself, but for the fans and everybody else. So that's how I decided to take the fight."

Despite his seemingly limited personal stake in the bout, and not getting the fight he wanted, Akiyama said there is "no negativity" in his motivation.

Akiyama hopes that winning and moving up the UFC ladder can only help in helping the sport's sagging populariy in Japan rebound. [MMA has dropped in stature there since PRIDE dissolved.]

"Whether it's a submission or knockout, I want to win decisively," he said. "And also, I want the people of Japan to see that I'm doing my best and fighting hard. And win decisively. That's basically what I'm after."

Leben will present many of the same problems Silva does, but just from the other side. Leben is a southpaw while Silva fights from an orthodox stance. Aside from that, the differences are many but often subtle. Leben tends to look for single head-hunting shots while Silva likes to flurry with power strikes. Leben is a kickboxing style striker while Silva is a Muay Thai stylist.

"Honestly, I didn't have much time, but I'm going to take that in stride and say it's a good experience and I tried accordingly as much as I could for that," he said.