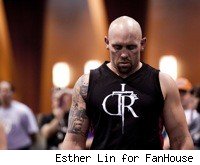 LAS VEGAS -- Brock Lesnar and Shane Carwin took part in Wednesday's UFC 116 open media workouts at the MGM Grand in Las Vegas, and once again, both men explained why they don't like each other and why they are nothing alike.

Lesnar, who hasn't fought in close to a year after recovering from diverticulitis, set the tone for Saturday's mammoth heavyweight title unification bout when he purposely knocked down a banner of Carwin with his forearm. Once he got that bit of aggression out of the way, the former WWE star spoke to the media.

Watch below as both weigh in on their fight and workout for the media and fans. The video was shot and edited by MMA Fighting's E. Casey Leydon.