The Cut List: Who's Facing Unemployment With Loss at UFC 116? 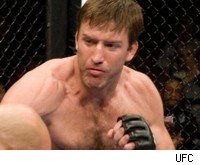 Amid all the hoopla surrounding the heavyweight title fight at UFC 116 this weekend, it's easy to forget that while some fighters are competing for glory and lucrative paydays, others are just fighting for survival.

Hardly a UFC event goes by without at least one or two of the losers getting quietly cut from the roster a few days later. Their contracts may still have three fights left on them, but one bad performance (or just consecutive losing ones), and suddenly that piece of paper is good for little more than bird cage lining.

So who could be facing make-or-break moments at UFC 116, and who's most likely to join the swollen ranks of America's unemployed after this weekend? Let's take a look after the jump.

Stephan Bonnar (11-7)
Who he's facing: Krzysztof Soszynski
Why he's in danger: Bonnar has lost three straight in the UFC, which usually merits automatic dismissal. He's still around because a) his last fight ended somewhat controversially, which explains why he and Soszynski are going at it one more time, and b) since Bonnar made up one half of the epic TUF Finale that propelled the UFC into the big time, Dana White has vowed never to cast him into the streets.
Odds of getting cut: 3-1. For starters, Bonnar and Soszynski are close enough in skill that it's not unreasonable to think he might save himself with a victory. If he doesn't, that'll be four straight losses, which makes it hard to justify his continued presence in the Octagon. Chances are White will then find some other job for him to do – most likely something that involves talking into a microphone – but at least he'll still collect a paycheck.


Share
Seth Petruzelli (12-4)
Who he's facing: Ricardo Romero
Why he's in danger: In two previous attempts, Petruzelli has yet to win a UFC bout. That's never a good sign, and if not for his high-profile win over Kimbo Slice, he probably wouldn't be back in the Octagon now. Petruzelli has said himself that a loss to newcomer Romero would likely lead to another quick, and probably final exit. Three strikes and you're out, even in MMA.
Odds of getting cut: 5-1. Romero is a UFC rookie without a lot of quality experience. Petruzelli should be able to beat him based on those two factors alone. If he can't, then he doesn't deserve to fight in the UFC anyway.

Kendall Grove (11-7, 1 NC)
Who he's facing: Goran Reljic
Why he's in danger: Grove has been up and down ever since narrowly winning season three of "The Ultimate Fighter." He's 1-2 in his last three fights, and the lone victory came courtesy of a sudden submission in a fight he was losing handily. Most of the guys he's beaten aren't even in the UFC anymore, and he has yet to show that he can win the tough ones against opponents who matter.
Odds of getting cut: Even. Reljic is a quality fighter and a difficult stylistic match-up for Grove. He also might be on thin ice with a loss, which should only make him more ferocious.

Daniel Roberts (9-1)
Who he's facing: Forrest Petz
Why he's in danger: Roberts was on the wrong end of brutal knockout in his UFC debut against John Howard. He's getting a second chance against Petz, who is himself getting another shot in the Octagon after three years in the smaller shows. If he loses two straight with no UFC wins to his credit? Forget about it. He's on the next bus out of town.
Odds of getting cut: 4-1. I like Roberts' chances to beat Petz, who doesn't have many impressive wins of late, and prolong his stay in the UFC. Both these guys should consider it a do-or-die situation, which always makes for fun prelim action.