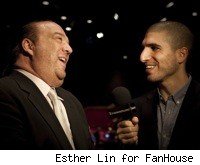 LAS VEGAS -- Would you believe it if I told you that Paul Heyman, the former owner of Extreme Championship Wrestling and Brock Lesnar's first manager in WWE, is now one of Lesnar's closest friends? Well, it's true, and it's amazing when you think about the fact that friendships don't last very long in the world of pro wrestling.

Lesnar and Heyman are so close that when they first saw each other this week, prior to Lesnar's title fight at UFC 116 versus Shane Carwin, Lesnar handed Heyman a photo of his daughter, Mya, and Heyman's daughter, Azalea, holding hands in their strollers taken at WrestleMania in 2003. Heyman pointed to that photo and gesture as an example of how strong their eight-year bond is.

MMA Fighting spoke to Heyman following Thursday's press conference about his relationship with Lesnar, how close he came to buying Strikeforce, his new project, The Heyman Hustle, and his future in MMA and pro wrestling.