Lesnar and Carwin Jockey for No. 1 Ranking While Gridlock Forms Behind 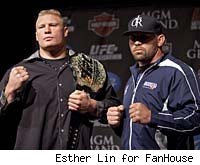 LAS VEGAS -- The first thing that came out of Dana White's mouth was an admission.

"Our heavyweight division used to suck," the UFC president said. "But now, it's stacked with incredible talent, and all these guys are lined up, waiting to fight."

Indeed, gridlock is forming on the road to the division's championship. On Saturday night at UFC 116, current champion Brock Lesnar returns from illness to defend his belt against top contender and interim champ Shane Carwin with the world's No. 1 heavyweight ranking on the line, but both guys don't have to look too far in their rearview mirrors to see rival war wagons speeding up behind them.

The fastest approaching of the group is unbeaten Cain Velasquez, who has been promised an opportunity to fight the winner, White confirmed after Wednesday's press conference. But the plans continue even further on down the line.


Share
"This is a great fight between two heavyweights on Saturday night and whoever wins, Cain Velasquez is waiting in the wings," White said. "Then whoever wins that, we've got [Junior] Dos Santos and Big Country [Roy Nelson] fighting. The winner of that fight is waiting for the next guy. If you can run through this division right now, you're the man."

Velasquez will take on the Carwin-Lesnar winner "as soon as possible," White said, while Dos Santos and Nelson are signed to square off at UFC 117 in August.

It's all part of a major revival for the UFC's heavyweight division, which for years was criticized for lacking the star power of PRIDE, which at one point had three heavyweight legends in their respective primes: world No. 1 Fedor Emelianenko, feared striker Mirko Cro Cop, and submission artist Antonio Rodrigo Nogueira.

Even after White secured deals with Cro Cop and Nogueira, he still heard the constant chatter about Emelianenko being superior to any UFC heavyweights. But with the Russian heavyweight star's loss last weekend to Fabricio Werdum on a Strikeforce show, most now accept that the Lesnar-Carwin winner should be considered the top heavyweight mixed martial artist on the planet.

Carwin (12-0) seemingly earned his opportunity with a first-round knockout against Gabriel Gonzaga, but after Lesnar fell ill, Carwin was given one more hurdle to clear. He did that in style, with another first-round TKO, this time vanquishing the former champion Frank Mir.

While Lesnar opened as a solid 2-to-1 favorite in the fight, the line has crept more and more towards the challenger in recent days. Asked about the development, Lesnar was not impressed.

"It's probably since I announced I was moving to southpaw," he said with a smile. "But really, who gives a s---?"

During Wednesday's open workouts, Lesnar (4-1) apparently let the cat out of the bag prematurely regarding his new stance.

Working with renowned boxing coach Peter Welch, Lesnar said he'd decided to switch from orthodox to southpaw, though he only briefly showed it off during a quick workout. It was an odd admission from Lesnar, who prides himself on keeping an ultra-secretive camp and has previously cut ties with training partners who violated his trust.

Asked about why he made the decision to switch stances on Thursday, Lesnar wouldn't discuss it.

"I probably messed up and spoke too soon on that," he said. "I'm just going to get in there and fight."

Whether it all was a head game for Carwin or he simply blurted it out by accident, we won't know until Saturday night, though the latter seems more likely. For his part, Carwin says he's ready for whatever comes.

"Everyone would switch stances in amateur wrestling," Carwin said. "They'd do that all the time. The wrestlers predominantly like to come out southpaw because that's how they used to wrestle. It would not be a surprise and we'll be prepared for it."

Carwin has the chance for lucky 13 to be his biggest win ever, while Lesnar has a chance to cement his claim as the best. And while their focus has to be solely on each other, they have to know that there are many others waiting in the wings for their own opportunities to become known as the best. Velasquez, Dos Santos, Nelson. Throw Mir and the always dangerous Antonio Rodrigo Nogueira into the mix, and you've got yourself some pretty shark-infested waters for whoever is wearing the gold.

"Brock wants to be known as the greatest heavyweight ever," White said. "Well, now's the time for that. Realistically, the heavyweight division's never been more stacked."