Kennedy vs. Souza, Noons vs. Gurgel in Works for Strikeforce: Houston 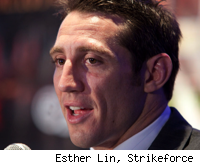 Strikeforce is moving forward with its middleweight division since releasing their champion Jake Shields.

Mauro Ranallo reported on Thursday's edition of The Fight Show, that the organization is working towards putting together a middleweight fight between Tim Kennedy and Ronaldo "Jacare" Souza at Strikeforce: Houston on Aug. 21. Strikeforce hasn't decided whether the fight will be for the newly-vacated title or a part of the proposed 185-pound tournament.

Also in the works for the Houston card, which is expected to be headlined by Muhammed Lawal vs. Rafael "Feijao" Cavalcante, is a lightweight fight between KJ Noons and Jorge Gurgel.

Kennedy (12-2), has won his last four fights in a row, including a submission win over Trevor Prangley at last month's Strikeforce: Los Angeles show.

Souza (12-2) is undefeated in his last three fights. He most recently beat Joey Villasenor via unanimous decision at Strikeforce: Heavy Artillery.

Gurgel (13-6), a former UFC veteran, has lost three of his last four. His dropped a unanimous decision to Billy Evangelista in his most recent fight.