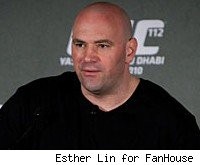 If the last few weeks worth of World Cup games have taught you to hate the sound of the vuvuzela, you're not alone. UFC president Dana White agrees completely, which is why the UFC has banned the headache-inducing horns from Saturday night's UFC 116 event in Las Vegas.

"This decision was pretty simple for me," White is quoted as saying in a press release sent out by the UFC today. "Vuvuzelas make the most horrific sound I've ever heard. I'd rather let Brock [Lesnar] punch me in the face than hear 15,000 people blow on those things. This is the biggest heavyweight fight we've ever done. We'll make enough noise this weekend when Brock and Shane [Carwin] finally step inside the Octagon."

And you thought you hated the vuvuzela.

The question we must now ask ourselves is, did the UFC really worry that droves of MMA fans would load up on vuvuzelas for fight night, or is this just an attempt to grab some cheap headlines (such as the one you see above) by linking UFC 116 to a current event keyword?


Share
As a follow-up, does this mean that security guards at the MGM Grand will really be doing a vuvuzela check at the door? After all, we're talking about an arena in Las Vegas where, when you walk up with an alcoholic drink in a container shaped like the Eiffel Tower, all they ask is that you pour it into a plastic cup that they've provided for you.

Whatever the reason or the method of enforcement, the UFC has staked out a position, and it's probably a smart one, especially considering that UFC 116 takes place in an indoor arena. If it nets the organization some cheap heat before what is expected to be a huge pay-per-view on the 4th of July weekend, so much the better.

If somehow a fan does manage to sneak a vuvuzela through security, however, his next problem will be using it without the other fans forcing him to eat it for dinner.