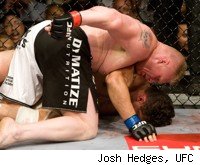 After a serious health scare and a year away, UFC heavyweight champion Brock Lesnar will finally return to the Octagon Saturday night at UFC 116, and his return will come against his biggest opponent to date, the undefeated Shane Carwin. It's one of the biggest heavyweight battles in the history of mixed martial arts, and it's the main event of what may be the UFC's biggest pay-per-view show of the year. We've got the full preview and predictions below.

When: The non-televised undercard will start at 7:30PM ET, the Spike TV fights start at 9 and the pay-per-view show starts at 10.


Share
Predictions on the five pay-per-view fights:
Brock Lesnar vs Shane Carwin
There's nothing subtle about this fight. It's two 265-pounders slamming into each other for possibly as long as 25 minutes, but probably a lot less than that. Carwin is an amazing physical specimen who has absolutely destroyed everyone to cross his path, but then again he's never crossed paths with anyone like Lesnar, who's bigger than Carwin, stronger than Carwin, faster than Carwin and a more accomplished wrestler than Carwin. Of course, you can turn that argument around and look at the fight the other way, too: Lesnar has never fought anyone as big and strong as Carwin, either. Lesnar's long layoff raises questions about ring rust, but ultimately I expect Lesnar to use his superior wrestling to control Carwin and eventually win a TKO with punches on the ground.
Pick: Lesnar

Yoshihiro Akiyama vs. Chris Leben
Leben just fought on June 19 at the Ultimate Fighter Finale, and I give him all the credit in the world for agreeing to take this fight on ridiculously short notice when Wanderlei Silva pulled out with an injury. But I don't give him a very good chance of beating Akiyama, who is a better, more complete fighter than Leben in every facet of the sport. I like Akiyama to finish Leben in the second round.
Pick: Akiyama

Chris Lytle vs. Matt Brown
This is a rematch of a bout fought three years ago under the United Fight League banner. That time Lytle caught Brown in a guillotine choke and got him to tap midway through the second round, and it's tempting to say that Lytle will catch Brown in a submission again this time around. But I think Brown's striking has improved significantly since then, and I expect him to get the better end of the exchanges standing up and win a decision.
Pick: Brown

Krzysztof Soszynski vs. Stephan Bonnar
This is another rematch, of a fight that just happened in February, and that ended in controversy when Bonnar couldn't go on after Soszynski cut him with an accidental head butt. It was officially ruled a TKO victory for Soszynski, but the UFC decided to give Bonnar another chance. I like Soszynski to win again this time around, probably by decision, which would represent Bonnar's fourth straight loss. Bonnar's job will always be safe in the UFC because of what he's meant to the company dating to the first season of The Ultimate Fighter, but I think the pay-per-view audience will see on Saturday night that Bonnar really isn't performing at a high enough level to be fighting in the Octagon anymore.
Pick: Soszynski

George Sotiropoulos vs. Kurt Pellegrino
Sotiropoulos looked absolutely sensational in beating Joe Stevenson in February, and although Pellegrino has a good Brazilian jiu jitsu game that won't make things easy for Sotiropoulos on the ground, I expect him to keep rolling and get the kind of win that will have fans clamoring to see him fight a Top 10 opponent.
Pick: Sotiropoulos