Seth Petruzelli: I Hope My Legacy Isn't Just That I Knocked Out Kimbo 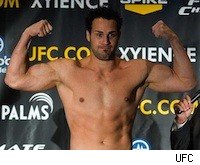 Seth Petruzelli isn't kidding himself. Despite the four-fight win streak he's accumulated since his last run in the UFC ended in 2007, he knows that there's one win in particular that is more responsible than the rest for his return to the Octagon at UFC 116 this Saturday.

And no, it isn't his first-round TKO of 9-18 fighter Sean Sallee, or even his most recent victory via submission over 5-5 Ryan White.

"Obviously, the Kimbo [Slice] win helped tremendously," Petruzelli (12-4) told MMA Fighting. "Without that, I think it would have taken a few more wins for me to get back in the UFC."

If you've only started following MMA in the last six months and are still confused about what 'that' refers to, it's Petruzelli's 14-second knockout of then undefeated internet brawler Kimbo Slice at EliteXC: Heat in December of 2008.


Share
Just as a refresher, Petruzelli took the fight on a couple hours notice after Slice's original opponent, Ken Shamrock, backed out on fight night. "The Silverback" moved up from an undercard bout against Aaron Rosa to fight out of his weight class against the promotion's biggest star.

After he won – and after he went on a morning radio show and raised some eyebrows by insinuating that EliteXC offered him certain incentives not to take Slice down in the fight – a minor controversy ensued. Shortly after that controversy, EliteXC collapsed under the weight of its own debt. Due to the timing of it all, some even wondered whether Petruzelli was partially to blame.

"I think they were doomed before I even got in the cage that night," Petruzelli said. "They were $55 million in debt before they even asked me to fight Kimbo. It was poor management skills on their part. Obviously it didn't help that there was a little bit of controversy after I beat Kimbo, but even without that they would have gone under anyway."

The downside for Petruzelli, who had just seized the greatest opportunity of his career on national network television, was that he was now a fighter without a home. He may have been the man who beat Kimbo (the first man to beat him, anyway), but he still had an 0-2 record in the UFC and his most recent employer wasn't exactly in the mood to write him a glowing letter of recommendation.

So he took to the small shows and racked up a couple more wins. He thought he was getting close to earning a return engagement in the UFC, but the phone still wasn't ringing. Just when he'd finalized a contract for his next fight in another small organization, the UFC called.

"The first reaction I had was, it's about time. I thought that I probably had to win a couple more before the UFC would have me back, but as soon as I agreed to the terms for this other fight the UFC called and said they had a fight for me. I'm excited to get another opportunity, and I'm not going to let it pass me by, that's for sure."

The way Petruzelli sees it, his prelim bout with newcomer Ricardo Romero is more like an audition than a triumphant return. If he wins, he'll be back. If he loses, there's a good chance he won't. After getting two chances before this, as well as a shot on season two of "The Ultimate Fighter," where he was eliminated in the semi-finals, he knows that this is probably his last chance to prove himself in the Octagon.

"It's a pretty cutthroat business. I signed a four-fight contract, but that doesn't mean they can't cut me after one fight if they want to. This is it. I have to win this fight, for sure. I'm not saying they'll automatically cut me if I don't, but that's how I'm looking at it. They're letting people go left and right because every fighter wants to be there and there's so much talent out there. It sucks, but that's how it is."

But another run in the UFC means more to Petruzelli than just bigger paydays and more exposure. It also means that he gets a chance to make people remember him for something more than just those 14 seconds in Miami.

Because as great as it was for his career to be the first man to beat the overhyped Slice, it's not the kind of thing he wants to be known for. Or at least, it's not the only thing.

"I need to trump that, definitely. I'd rather be known as a great fighter all around than as someone who just beat one person who was still pretty new to the sport. I've been doing this for ten years now. I hope that my legacy isn't just that I knocked out Kimbo. I love martial arts and I've been doing it since I was seven years old. I want people to think of me as a great martial artist and a great competitor. I know that's where a lot of my fame at this point came from, and that's fine, but I don't want it to be the lasting impression I leave on the sport."