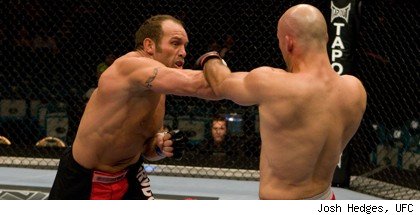 Shane Carwin is an undefeated fighter about to have by far the biggest fight in his mixed martial arts career on Saturday night, when he challenges Brock Lesnar for the heavyweight title at UFC 116.

But if things had gone just a little bit differently, the 35-year-old Carwin could be winding down a long NFL career right now, not reaching the pinnacle of his MMA career. Carwin was a Division 2 All-American linebacker at Western State College, and in an appearance on SportsCenter Wednesday, he talked about what might have been in football.

SportsCenter anchor Josh Elliott -- one of the TV sports anchors who really gets MMA -- did a great interview with Carwin that included this exchange:


Share
Elliott: Our Mel Kiper had you as the 16th best linebacker in the class. He said because of your size, exceptional strength and physical style, you basically just splatter guards in the box. How is it that you ended up in the UFC instead of the NFL?

Carwin: I think that statement says it all right there. I was physical, I loved to hit, and those are great attributes of a great linebacker. I was fortunate enough to carry it over into the UFC.

The NFL saw Carwin more as a project than an elite prospect, and a back injury scared teams off -- NFL teams don't have time for Division 2 projects with bad backs. But even if no team was going to take the time to prepare him for the pros, Carwin had the time to focus on his training, first in wrestling and then in MMA, and build himself up to the point where on Saturday night he might become the heavyweight champion of the world. Mel Kiper was wise to recognize that athletic potential.