In Brock Lesnar, UFC Has a Pay-Per-View Powerhouse 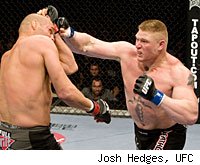 To establish himself as the undisputed heavyweight champion of mixed martial arts, Brock Lesnar still has to beat Shane Carwin Saturday night at UFC 116. But there's no question that Lesnar -- just five fights into his MMA career -- is already the undisputed champion of pay-per-view.

UFC President Dana White said Wednesday on the LaVar Arrington Show with Chad Dukes on 106.7 The Fan in Washington, D.C. that for all the popular fighters on the UFC roster, Lesnar stands alone as the one who brings in the pay-per-view buys like no other.

"Brock Lesnar has become that guy," White said. "The biggest pay-per-view in UFC history was done by Brock Lesnar, without a doubt."

More: UFC 116 Fight Card | UFC 116 Pictures | UFC 116 Results
White was referring to UFC 100, when Lesnar beat Frank Mir for the heavyweight title in by far the promotion's most lucrative event to date. But White said he believes Lesnar-Carwin will be, in his own words, "the biggest fight in UFC history."

It's hard to see Lesnar-Carwin quite matching UFC 100's pay-per-view success, which was estimated at more than 1.5 million buys. But Lesnar-Carwin will undoubtedly be the promotion's biggest event since then, and if Lesnar keeps winning, his heavyweight title fights will continue to do huge business.

In fact, Lesnar has the potential to become the first mixed martial artist who could legitimately be called America's biggest pay-per-view draw. In the early days of the UFC, its pay-per-view buyrates were dwarfed by the likes of Mike Tyson and Evander Holyfield, and even at the prime of his career, Chuck Liddell couldn't draw like Oscar De La Hoya. But if Lesnar holds onto the heavyweight title -- and if Floyd Mayweather and Manny Pacquiao can't come to terms to fight each other-- Lesnar will also hold onto the title of the country's No. 1 pay-per-view fighter.

White would never say so publicly, but privately he has to be hoping Lesnar beats Carwin, knowing that Lesnar's unique ability to convince fans to part with $50 to see him fight is a very valuable commodity to the UFC. White has promised that whoever wins, the UFC's next heavyweight title fight will come soon, with Cain Velasquez already identified as the No. 1 contender. After Velasquez fights Lesnar or Carwin, Junior dos Santos would likely be next in line, meaning the UFC should have three big heavyweight title fights between now and Fourth of July 2011.

"We have a complete roster of big, talented guys that people care about and want to see fight," White said. "Our heavyweight division used to suck, and now it doesn't. It's packed ... stacked with talent with lots of good fights coming up that people want to see."

The fighter people most want to see is Lesnar. He's the biggest start the UFC has ever had.