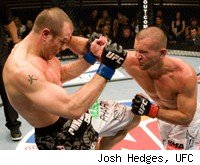 The way Chris Lytle is going, he might have to change his nickname – and not because another "Lights Out," James Toney, is now in the UFC.

"Mr. Bonus," perhaps? Lytle, one of the UFC's longest standing veterans, has won bonus awards in four straight matches and seven of his last nine. Getting his name called by Dana White at the post-fight press conference practically has become an automatic. But Lytle told MMA Fighting on Wednesday he's not ready to change his nickname just yet – with implied emphasis on the "yet."

"Maybe if I get to the 10 bonus point, I can start thinking about that," Lytle said. "But you've got to at least get to double digits first."

Lytle has a good chance to creep one notch closer on Saturday night at UFC 116. His main-card welterweight bout with Matt Brown has all the makings of another Fight of the Night.
More: UFC 116 Fight Card | UFC 116 Pictures | UFC 116 Results


Add up Lytle's bonus checks from the UFC and it's likely they total more money than his show and win checks – pretty phenomenal considering this will be his 17th fight with the company. Lytle said he hasn't been thinking about bonuses, though he did admit those checks probably outpace his regular fight paydays.

"That's probably correct," Lytle said. "But I come at it with the attitude, my last eight or nine fights, that I'm just going to come after the guy. I'm not going to try to win a decision – I'm actually coming out to try to stop the guy. So it's good to see that the UFC is recognizing that and rewarding me for that (when it's an exciting fight and it goes to a decision)."

The fight with Brown (13-8, 4-2 UFC) is a rematch from a United Fight League bout in Lytle's native Indianapolis nearly three years ago. Lytle (38-17-4, 7-9 UFC) won that fight with a second-round guillotine, but said any expectations left over from that bout go out the window for this one.

"I have a feel for how he fights, but I think he's a much different fighter since the first time I fought him," Lytle said. "He's done a lot, he's trained a lot harder, he's got a lot more experience in big fights. And that's a huge thing – you really can't measure that enough. The most important thing in my mind is that experience."

Lytle and Brown have similar styles – they both come full-steam ahead, guns blazing, and can do it for three rounds. Lytle, a former boxer with a 13-1 professional record in the ring, knows that he's most frequently looked at for his standup skills. And that's why his submission win over Brian Foster at UFC 110 in February was so satisfying for him. It was his first submission win since choking out Brown in their first rodeo.

"I did like that," Lytle said of his Submission of the Night win in Sydney. "I remember before the fight, people kind of thought I was one-dimensional and all I could do is throw punches the whole time. But I've been working a long time on every aspect of fighting. That kind of let people know that I do do lots of different things, and then some people went back and looked at my other fights. I think when I do that, it makes my standup fighting better because people can't just defend against punches. They have to worry about different aspects of my game. I like to try a little bit of everything."

If Brown has an Achille's heel on paper, it would appear to be his submission defense. Of his eight career losses, six have come by way of submission. And for many fighters, that could crawl right up into a permanent place in their psyches. Lytle doesn't think that's the case with Brown, even though his opponent surely recalls how their first meeting ended.

"It depends on the person; some people, I think, it might become a problem for them," Lytle said. "But in my opinion, he's the kind of person who's just going to say, 'Ya know what? I'm not going to let him take me down, and I'm just going to come after him the whole time.' And that's what I kind of like about his fighting style. He's going to be able to out-tough people and go through them, and that's one of the reasons I was excited about getting this fight."

When it comes to out-toughing, Lytle, too, is a the top of the list. A full-time Indianapolis firefighter by day, he's never been knocked out or submitted. His only stoppage losses have been TKO stoppages due to cuts.

And despite all those bonus checks putting him in a position where he might be able to quit the day job and concentrate solely on the fight game, he said he has no intention of doing that.

With a two fight winning streak and just a close split decision loss to Marcus Davis at UFC 93 separating him from four straight, there is certainly nothing broken with Lytle. The four straight bonus awards – three for Fight of the Night – are proof enough of that.

But if things go his way Saturday, it's hard to imagine him not being on the receiving end of another bonus award. He's got the Triple Crown already with four Fight of the Night bonuses, two Submission of the Night wins and one Knockout of the Night – so he believes opponents like Brown have to now realize there are multiple ways he can beat them now that he brings a little unpredictability with him.

"My gameplan usually lasts about eight or nine seconds until people start getting hit, and then it kind of goes out the window," Lytle said. "But I'm just going to go out there and try to get a fight and whatever happens, happens. The last fight, I didn't plan on doing a kneebar, but it presented itself. I'm just going to fight, and if something presents itself, I'm going to take it. So just go all out and try to end the fight in any way possible as soon as possible."