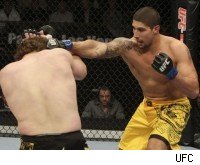 LAS VEGAS -- Brendan Schaub's name did not appear anywhere on the UFC's official schedule, but that didn't stop the Colorado native from making an appearance at the open workouts at the MGM Grand Conference Center Marquee Ballroom.

While Schaub was there mainly in support of teammate and main event participant Shane Carwin, in a way, it also symbolized his hope to be considered among the sport's top-level heavyweights following his UFC 116 match against Chris Tuchscherer.

"I expect to be on the main card after this," Schaub (5-1) told MMA Fighting. "It's an honor to be on the Spike prelims, but after this, I expect big-name opponents. I think this will separate me from the rest of the up-and-comers. I think I showed what I do to up-and-comers like Chase Gormley and the guys on the [Ultimate Fighter] show, so I think from here it's going to be some pretty big-name UFC vets for me."

While Schaub sees Tuchscherer (18-2, 1 no contest) as a challenge, it's one he feels his career has prepared him for. On the heels of matches against Johnny Curtis, Jon Madsen and most recently, Chase Gormley, a bout with Tuchscherer will be his fourth time facing a former collegiate wrestling All-American in the last two years.

He finished Curtis and Gormley in a combined time of less than two minutes; Madsen made it into the second round. Three wrestling stars, three knockouts. Chris Tuchscherer, your turn.

More: UFC 116 Fight Card | UFC 116 Pictures | UFC 116 Results
"I guess I'm the Achilles heel for these stud wrestlers," Schaub said. "All I know is wrestling. My first day in the gym, my training partner was Shane Carwin, this world-class wrestler. So I'm used to seeing it, and Chris isn't going to do anything I haven't seen before in a training room."

Interestingly, the Schaub-Carwin training combo represents something of a team in a camp war with Tuchscherer and his training partner, Brock Lesnar. Tuchscherer and Lesnar are both based in Minnesota.

Schaub says that this was the first time in his career he's been in camp with another teammate preparing for a match on the same day, and believes it was a benefit for both men.

"It's a unique thing, and the intensity of this camp is much different than others," he said. "We're on the same routine with workouts and eating, we're helping to push each other get the best out of this. It's a pivotal fight in both our careers and I think we took each other to another level."

In his last fight, Schaub was competing after losing for the first time. After being KO'd by Roy Nelson, he had to mentally deal with the reality that losing brings.

While Schaub has never watched the Nelson fight, his trainers and partners have done so and addressed the mistakes he made that left a hole to expliot. So in losing, he feels that he's been strengthened.

"For me, I've never lost or had to deal with adversity in fighting," he said. "All my fights had gone very smooth. The fight's easy when you're knocking everyone out in under a minute. It's good times. But coming off a loss, you find out what a fighter's really made of. And I think I showed everyone that night."

Since then, he's been antsy to show everyone that it was a one-time aberration. Tuchscherer is rugged enough to give most heavyweights fits, but Schaub's trainer Trevor Wittman believes that Schaub's conditioning is just one of several factors that will win the day.

"Chris is slower than Brendan so I think we have the advantage in speed," he said. "I think our positioning is better and I think Brendan's cardio is a key factor in this fight. He's a workhorse and he only gets better as the time goes on. So we did a lot of defensive tuneup on Brendan where I think we were lacking just a little bit, and now we're working off that jab. He's got a great jab and when you have a great job, it makes fights easy."

"The biggest thing I'm concerned about is he's content with grinding out a win," Schaub said. "He's cool with it going to decision. I'm not. Being live on Spike, and the opportunity Dana White and Joe Silva gave me, this thing is not going to a decision. He's not going to have his way and grind it out. I'm not going to let people think, 'God, why did I tune into this?' I'm expecting to kick the night off in style and get people to buy this pay-per-view."