Your Guide to Coping With Fedor Fans After Shocking Loss 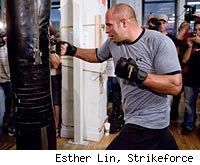 The way some MMA fans have reacted to Fedor Emelianenko's upset loss to Fabricio Werdum, you'd think he was kin. You know who these people are. They're the ones still moping around the house wearing the Fedor t-shirt they made themselves at the mall. Maybe they're even staying up all night drinking Mountain Dew and re-watching the fight over and over again on YouTube while writing in their journals.

In short, they're taking the loss a lot harder than Fedor probably is, which is weird and a little pathetic.

What it's not, however, is terribly unusual for MMA's passionate fan base. When people identify so intensely with a particular fighter, it's normal for them to feel almost as if their own fates are bound up in that fighter's victories and defeats. Maybe it's not terribly healthy, but neither is all that Mountain Dew.

If you know one of these Fedor depressives – or if you're one yourself – it might be helpful for you to know a little about the grieving process MMA fans go through when their favorite fighter goes down. Think of it as where the Kübler-Ross model meets the cage. Be prepared for the intensity of each stage to be magnified at least five times over for every year the fighter in question has gone undefeated. In the case of Fedor fans, that means we're talking about some serious anguish here:


Share
1) Shock
This stage sets in immediately, but doesn't last long. It's that feeling the fan gets as he sees Werdum sinking the triangle choke and finds himself thinking, 'Surely, Fedor will get out of this. Any second now. It's not like he's going to submit.' Then he does and the fan's mouth drops open, he can't speak a word, and he looks around for some signal from the referee that this was just a practice round. This can't be reality, the fan thinks. It's far too absurd.

2) Bitterness
This one gets ugly. Here the fan is likely to say some things that he will later regret about the fighter who defeated his idol. If he's Brazilian, as in the case of Werdum, a vitriolic condemnation of everything from jiu-jitsu to samba music is likely to follow. If the opponent has a distinctive physical characteristic, such as the diminutive stature of Matt Serra, who downed Georges St. Pierre in a similar upset, expect some shameful remarks about midgets. Lots of swearing in this stage.

3) Excuse-making
Fedor only lost because he brought his wife to the U.S. with him for this fight. Or because he got that weird tan, which sapped his strength. Or because he skipped out on "The MMA Hour" and angered the MMA gods. Or because Werdum somehow cheated. This is the stage where steroid/greasing/illegal maneuver allegations usually come in. The fan feels that there must be an explanation for the loss, and it must be something dastardly. Conspiracy theories abound.

4) Despair
This is the stage most Fedor fans are in right now, three days after the bout. Everything sucks. Nothing brings them joy anymore. Life itself has been rendered a hopeless and meaningless exercise in futility. If Fedor can be beaten, and by someone like Werdum, then there's nothing worth believing in. This is the most dangerous stage, and the one in which fans are most likely to renounce their religions, abandon their marriages, and burn their Pride DVD collections.

5) Doubt
Was Fedor ever really as good as we thought he was? Could he have been overrated after all? Is it possible that all these years of apparent greatness were an illusion? This stage lasts approximately fifteen seconds before being locked away in one the hidden rooms of the mind that the fan vows never again to enter.

6) Acceptance
So Fedor lost. Big deal. All it means is that he's human. Everyone loses, and in the end it will only make him more dominant. He will rise up stronger and better due to this motivating, humbling experience, and there will be much wailing and gnashing of teeth among the infidels who questioned his greatness. This stage lasts approximately twenty years, or until the next loss. Whichever comes first.