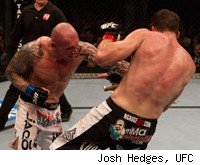 When it comes to fight preparation, Krzyzstof Soszynski has most assuredly been on both ends of the spectrum.

Last May, "The Polish Experiment" got less than three weeks notice to fight Andre Gusmao at UFC 98. In August, he got about a month's notice to fill in for Matt Hamill against Brandon Vera at UFC 102. He came through with a knockout against Gusmao, but was sluggish and out-pointed against Vera.

That's why he would much prefer a nice, long training camp – even if, like this time around, it's essentially an eight-month camp to fight the same opponent twice.

Soszynski (19-9-1, 4-1 UFC) rematches with Stephan Bonnar (11-7, 5-6 UFC) at UFC 116 on Saturday after a controversial ending to their first fight at UFC 110. An accidental head butt opened up a cut on Bonnar's head that forced a TKO stoppage, and Bonnar's appeal to have the bout ruled a no contest was denied. Both fighters agreed a rematch would be prudent, but Soszynski said this is not likely to be a continuation of their last meeting.

"I think it's going to be a whole new fight," Soszynski told MMA Fighting earlier this month. "I think we both learned a lot about each other. I think I surprised him with my striking a little bit. I just came forward and was more aggressive than I usually am because I knew he was going to bring his game. I think this time around, it's going to be a little slower paced, a little more of a chess game."


Share
To prepare for that chess game, Soszynski has been working at several camps around Southern California.

"I'm very privileged right now to be a part of four or five training facilities," Soszynski said. "I go between (Team) Alliance, I have Mark Munoz, I have Dan Henderson and Team Quest, there's a couple good gyms in Oceanside – so I'm really fortunate enough that I can travel around and train with a whole bunch of great fighters and just learn from them all."

For Bonnar, specifically, Soszynski has hooked up with Jason "Mayhem" Miller because of his similar build and style, as well as Strikeforce light heavyweight champion King Mo Lawal and the Nogueira brothers.

"Especially having 15 weeks for a fight, it's going to get stale working with the same person over and over again," Soszynski said. "Instead of getting better, you're learning how to fight them instead of your opponent. So it's nice to have that open-door policy where I can go in and go out and everybody's cool about that."

Though he's a 2.5 to 1 favorite in the fight and has been down this road before with Bonnar, Soszynski said he has to treat this fight like a loss would mean a pink slip. That's something Bonnar might not have to worry about as much – UFC president Dana White has said on multiple occasions that Bonnar, thanks to his famous battle with Forrest Griffin on the first finale of "The Ultimate Fighter," will always have a home in the organization.

"I have a feeling that's why all the pressure's on me," Soszynski said. "He's got a home. He's never going to leave the UFC. If he's one of Dana White's boys, then I'm the one that has to win this fight. He's got a job, he's got nothing to worry about. If I lose to Stephan Bonnar, I might lose my job. So I've got to go in there with the mentality that I'm going to beat this guy. I think I proved in the first fight that I belong in there with him. We're just going to try really hard to finish him, and I'd like to be the first guy to do it."

Bonnar has not been submitted or knocked out in any of his seven career losses. His two TKO losses were due to cuts against Soszynski in February and against Lyoto Machida in a Jungle Fight bout in Brazil in 2003. For that reason, Soszynski said he's prepared to have to outpoint Bonnar to walk away with another win. And though he has two Submission of the Night bonuses to his credit, he'll be hesitant to go to the ground and stay on the ground against Bonnar.

"His jiu-jitsu is very tight," Soszynski said. "He's a lot longer than I am – he's got long limbs. After the first fight, I feel like I can stand up with him for three more rounds and go toe-to-toe and not be worried about anything that he throws because I've seen it. If it goes to the ground, it's a question mark because I know his jiu-jitsu is a little better than mine and he's a little lankier, so I can't be sitting in his guard. But if I feel that I'm losing the fight on my feet or there's an opportunity to score more points with a takedown, then I'll go for it. And I'm sure he's thinking the same thing about me."

Of major importance to Soszynski, though, is putting on a fight that pleases the fans – and the boss, of course. Though he acknowledges he believes the UFC likes his style, aggressiveness and his look, which makes him a longshot to get fired for a loss at this stage in his career, he said he had a recent conversation with Bonnar in which they discussed their rematch.

"I was just at UFC 114 and he sat in the row right in front of me," Soszynski said. "We just chatted it up and said, 'Hey, let's go out there and put on another great show for the fans and try to see if we can get that Fight of the Night bonus.' He's very nice. I feel I'm the same way. I'm a very nice guy, and I don't take anything that happens in the cage too hard at all. I don't (trash) talk about anybody. We're both two nice guys and we're both going to go in there and lay everything on the line for the fight and let the fans and the UFC really enjoy the show."