Shane Carwin: 'One of Us Will Need Help Leaving the Octagon' at UFC 116 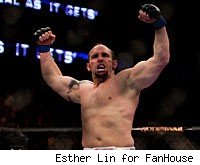 Shane Carwin may not be doing an all-out media blitz in advance of his heavyweight title fight against Brock Lesnar at UFC 116, but that doesn't mean he's not still available to his fans. He communicates with them regularly on his website, Shane-Carwin.com, and even recently posted his salary information for the upcoming title fight. Judging by their reactions online and on Twitter, they reward this accessibility with a fierce loyalty.

But to find out what's going through his head as he prepares to take on Lesnar in what may now be a bout to determine not only the UFC champ, but also MMA's No. 1 overall heavyweight. MMA Fighting reached out to Carwin over e-mail and got a few interesting responses about where he sees himself in the UFC hierarchy, and what he thinks of Lesnar's take on MMA greats like Fedor Emelianenko.

Ben Fowlkes: You're a little over a week from a title fight in what may very well be the most watched UFC pay-per-view of the year. Does it feel like a lot of added pressure as you prepare for this fight? Do you think it will feel different once you're in the cage?


Share
Shane Carwin: Really, no pressure at all. It feels like a training camp, just one that has a big fight attached to the end of it. I really do not get nervous or anxious. I have either done the work or not. You have made the sacrifice or you have not. I really enjoy the competition. It is the reward for training so hard.

The only thing that Brock possesses that is different from my other training camps is his size and speed as an opponent. We have taken steps to adjust for this fight and having a year to prepare for this opponent has been great. I am ready.

A lot has been made of your decision not to do any media leading up to this fight. Tell me a little bit about what prompted you to make that decision.

Well here I am, aren't I? I would say it was more of a limiting then a "not doing". For me, it comes down to time management and with my job, training and family I am just really tight for free time. If you pick one you are leaving many out. I figured I would allow Zuffa to handle the media and selling the fight and I would support whatever they needed.

More: UFC 116 Fight Card | Shane Carwin Pictures
You've made a point of keeping your job as an engineer even as your fight career has taken off. Have you been working regular hours in the weeks leading up to this fight, or did you take time off to focus on training?

They work with me on my hours. I am thankful I do not have a job or an employer that expects me to clock in at 8am and out at 5pm. I have a lot of free reign [sic] as long as I am doing my job, staying on or ahead of schedule and give them 110 percent when I am not in camp. I have been in camp for a long time (over a year) so I am sure they are ready for me to come back a bit more regularly.

You mentioned on your website all the things you've done for Zuffa and you disclosed how much you'll make for this fight (before sponsorships and bonuses). If you win this fight and become the undisputed UFC heavyweight champ, will it be time for a restructuring of your deal with the UFC? Would getting a share of the pay-per-view revenue be part of that?

I do not think so. Beating Brock does not make you Brock. I will still need to insult most of the fighters in my division, flip off the fans, insult the biggest sponsors the UFC has and then and only then will I renegotiate with Zuffa. Dana and Lorenzo have taken good care of my family and I. They have given us more than they are obligated to and we are happy.

My manager always says it is not about making money when you fight but to make money when you are not fighting. We really do not have our hands out for anything more – if it comes we will take it and smile. I love fighting for the UFC and for me I choose to do this, I do not have to fight to survive. I am honored to be working for the UFC and representing them in the "fake" champions category.

You also mentioned some push-back from the Zuffa "talking heads" about stepping back from media obligations, but it doesn't seem like Lesnar has ever, even on his best pre-fight weeks, done as much media as you usually do. Do you feel like he gets preferential treatment because he's such a proven draw for the UFC?

No, I think that we have had two UFC's, one WEC, Strikeforce, Bellator Finals and a TUF Finale that has occupied the media's attention. I think to say that I am not "selling" a fight when I have been selling this fight for almost a year is pretty asinine. I am not overly worried about the media attention or the fame. I want the best Brock ever on July 3rd. I want a war, and one of us will need help leaving the Octagon. Everyone wants me to finish this fight fast. I would love to be able to show my entire MMA game on July 3rd when the world is watching.

You seem to have a really committed, passionate fan base with the "Carwin Army." Why do you think you've generated this ardent following? How much of it has to do with how active you are on your website, interacting with fans and letting them get to know you?

Team Carwin is amazing. They are so supportive of me and my sponsors it really is commendable. We tripled Dethrone Royalty's Twittter followers in a few days. I think the credit has to go to the internet. I have a lot of ways to reach my fans and I am less dependent upon people to share my message when I can share it directly with them. The internet has given us the ability to connect with fans like never before and I love hearing what they have to say.

Brock has long been annoyed by the fact that, even though he holds the UFC belt, most fans still regard Fedor as the #1 heavyweight [ed. note: This interview was conducted two days before Fedor's loss to Fabricio Werdum]. What would it mean to you to become UFC heavyweight champ? Do you think the UFC champ is necessarily the overall MMA heavyweight champ?

Well, Brock's MMA math is limited at best. Fedor is the best heavyweight and possibly one of the best fighters ever. He has been tested and proven over time that he is a real legend. That is my biggest issue with Brock. He likes to take away from others without knowing or thinking about what he is saying.

We may never know about how well Fedor would do in the UFC. We will have to just live with the fact that for the period of time he was fighting, he was one of, if not the best MMA fighters of his time. Guys like Brock and even myself could learn a lot from Fedor and his work ethics.