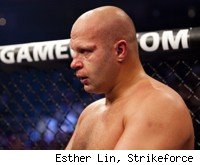 Fedor Emelianenko has been at the top of my list of the Top 10 pound-for-pound fighters in mixed martial arts for a year and a half, since he beat Andrei Arlovski in January 2009. He's obviously not at the top anymore, after Fabricio Werdum submitted him in just 69 seconds on Saturday night.

1. Anderson Silva (2): Although Silva has looked a little bored at 185 pounds lately, I think we're going to see a return of the Silva of old in August when he defends his title against Chael Sonnen. And the Silva of old is the best fighter in the world.


Share
2. Georges St. Pierre (3): St. Pierre is sometimes criticized for being too cautious, relying on his wrestling to get superior position and then being satisfied to stay on top and win a decision, rather than go for the kill. But what happened to Fedor Saturdy night showed why it's not always smart to go for the kill. Unlike Fedor foolishly going to the ground with Werdum, St. Pierre always wants the fight to be in the position where he'll have the best chance to win.

3. Jose Aldo (5): Of all the champions in all the weight classes in MMA, Aldo has the best chance of any of them to put together a title run that could span years. He's 23 and by far the best featherweight in the sport. It's going to be a thrill to watch him fight for years to come.

4. Shogun Rua (NR): He has bad knees, which is a concern for any athlete, but the 28-year-old Shogun looked as dominant as ever when he beat Lyoto Machida last month.

5. Frank Edgar (6): I don't think the 28-year-old Edgar gets enough credit for his unanimous decision victory over B.J. Penn in April. He'll get the chance to show it was no fluke when they fight again in August.

6. Dominick Cruz (7): The WEC bantamweight champion is 15-1, and he's only 24 years old. Seeing all these great fighters in their 20s makes me very excited for the future of the sport.

7. Lyoto Machida (4): He's coming off a nasty knockout loss to Shogun, but Machida will be back. I expect to see him fight for the light heavyweight title again some time in 2011.

8. Rashad Evans (9): He earned the next shot at Shogun by beating Rampage Jackson, and although I'll probably pick Shogun to win, I like the potential Evans has for coming in with a good game plan, relying on his wrestling, and potentially getting the light heavyweight belt back.

9. Joseph Benavidez (10): I'd love to see Benavidez fighting at 125 pounds, which he could easily make. But right now the WEC doesn't have a flyweight division, so instead Benavidez is fighting at 135. He's plenty good there, too, and he'll get the chance to prove he's the best at that weight class when he gets his rematch with Cruz in August.