Frank Shamrock on Retirement: 'I Cried Every Morning for Two Weeks Over This' 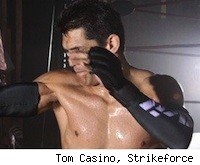 Saturday night's Strikeforce event in San Jose saw one MMA legend fall while another announced that he was hanging up the gloves for good. At 37 years old, and after a career that spanned 15 years, an emotional Frank Shamrock declared that his time as a fighter had reached its end.

Yesterday MMA Fighting spoke with Shamrock to find out how he arrived at this conclusion, and what's next for "The Legend."


Ben Fowlkes: You called it quits this weekend, but why now? Your fight with Nick Diaz was over a year ago, so it seems like it wasn't that loss that made you decide. What was it?


Share
Frank Shamrock: It was just my body and the time. I put the machine back in the shop and ramped it up and it just didn't perform. The last time in my fight with Nick – it used to be that it didn't matter how hurt I was going into a fight, I always performed. When I fought Nick I didn't perform. I had injuries that wouldn't allow me to play my game and to entertain. So I knew when I tried to put my body to work again, it's done. The machine's down. I just can't race it any more.

When did you realize that your body wasn't responding the way it needed to any more?

I got hurt pretty good a couple weeks into training for the Nick fight. It was a very odd injury in my abdominal region that felt like muscle tearing and just weirdness, and it was because my cervical vertebrae were compressed. That compression caused tension and the tension cause my muscles to kind of tear out. It's just, my whole body kind of reached a point last year, or maybe the tail end of the year before, where it was just like, hey, we're kind of done. I don't know quite how to explain it.

That's a pretty uncommon thing for pro fighters to be able to come to that conclusion so easily. You seem very at peace with it.

Well, I don't think I was ever a fighter. I think I was an athlete and a martial artist, and I just happened to be fighting. My art will always continue on, but as an athlete, the machine is done. I can't keep tying the two together. To me, it makes no sense to go on. I can't be my best, so I'm doing a disservice to my art. That's against what I believe in.

Does it help that you've been smart with your money over the years and so you don't necessarily need to continue on for financial reasons?

I talked to your brother Ken once about why it was so difficult for fighters to hang it up, and he said that it was because the same qualities that make a guy a champion fighter make it difficult for him to admit that it's time to quit. That doesn't seem to be such a struggle for you. Why do you think that is?

I think I came at it differently. I got into this sport as it was explained to me by my dad, and I took I scholastic approach to it. I was not a street fighter. I still, to this day, don't like physical violence. It was an art form and a sport and I approached it that way. It wasn't from a place of anger for me.

I mean, I get what [Ken's] saying about how tough it is to give it up. Trust me, I cried every morning for two weeks over this, because I knew I had to go out there and say the words that would end my journey. That was the hardest thing I ever had to do, but it was the right thing to do. If some of these other guys would search their souls, they'd also know it's the right thing to do.

Your speech on Saturday night was very eloquent and also clearly very emotional for you. Did you do anything to get yourself mentally ready to give such a difficult speech?

[Laughs] Well, I paced in my garage and I talked out loud. But literally, I cried every morning over it for about two weeks. Saying the words were really making me realize what I was doing and what I had to do. That, in itself, was the hard thing. Not giving it all up, but to face that my body was done. I just couldn't keep going.

So what's next for you? More time at the broadcasting table?

Full-time on broadcasting, and I think my role is really to be that spokesman for our sport. That was the role I chose and accepted and I've been doing it regardless of what anyone else thought. But I want to take that back. I don't need to fight. My mouth is way stronger than what I can do with my body now.

Is there a chance you'll take a front office position with Strikefore and/or Showtime now?

I don't know about an actual office. [Laughs] You know, I've talked to both [Strikeforce and Showtime]. I have some really strong marketing ideas that I think will help this sport. I've been very successful with brands. They listen to me. That's what it's about. They think I'm nuts sometimes, but they listen to me, and they're smart people. I think we'll figure something out. I don't know if it's a real job. I'll probably run around and do the exact same things I've always done, but not have to beat myself up.

There was a lot of talk in the post-fight press conference about your proudest moments in the sport. What do you want to fans to remember you for?

I just want to be known as the guy who made a difference because he really believed. I think this sport can change a lot of things. It changed my life.

You mentioned that you left the UFC in part because you didn't believe in what they were doing. What does that mean?

I think they put on a good sports entertainment product. I don't believe they're on a martial arts journey. That's my own personal opinion. But I saw their stuff and I was like, guys, I don't believe in this.

Do you think Strikeforce is on a martial arts journey?

100%. Scott Coker's a martial artist. He's an honest guy. If you ask him to do something he'll do it, or else he'll tell you why he can't do it. That's what fighters need. Fighters need someone they can trust. We can't trust anybody.

Is that something you can bring to the management side of things, since fighters know you've been in their shoes before?

I think so. I also think the fighters need to step up. You know, these guys show up thirty minutes late for media, and we're paying thousands of dollars to have all these people there. They need to understand that we're all in this together. We're not fighting each other; we're helping each other. Scott and I figured that out from the beginning.

That's all the questions I have. Anything else to add?

Just that I really do appreciate the fans. You know, I watched these guys in the crowd, some of them who've been following it since they were kids and now they're grown men and have babies. I've seen them along on this journey with me, and it's just been the greatest experience of my life.