Falling Action: Best and Worst of Strikeforce - Fedor vs. Werdum 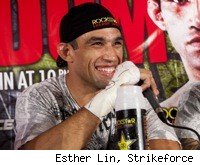 As Fedor Emelianenko gave his customarily muted, stoic remarks at Saturday night's post-fight press conference -- his attitude is almost exactly the same in defeat as in victory, it turns out -- the party was already underway out in the hallway.

Fabricio Werdum and his team of exuberant Brazilians turned the backstage area of the HP Pavilion into their own private Carnival, and the sound of their cheering almost drowned out Emelianenko's brief responses.

They danced. They sang. They even got Forrest "Ghost Dog" Whitaker in on the act. When they returned to their hotel, they did a Gracie-train into the bar. In other words, they had an awesome time. Just imagine how crazy you'd go if somehow you made Fedor tap out in 69 seconds. Then multiply it by five or six very vocal Brazilians.

As easy as it is to get caught up in what the loss means for Fedor, it's worth taking some time to think about what the win means for Werdum. It was, he said, the happiest night of his life. Judging by the smiles on the faces of his entourage as they danced their way through the hotel lobby, he wasn't the only one who was savoring the moment.

The fact that Werdum is open to a rematch now, even after acknowledging that Fedor is "the best," tells you that while he might not think that his one great night makes him the world's top heavyweight, he also doesn't think that he just got lucky. That's the spirit you have to admire. And it's an offer Strikeforce should take him up on right away.

Now on the winners and loser coming out of Saturday night's event.

Biggest Winner: Fabricio Werdum
This one is obvious. Unless Werdum cures AIDS or assassinates a world leader, he'll probably always be remembered as the first man to truly beat Fedor. Whether he'll be remembered for that in the same way that Buster Douglas is remembered for beating Mike Tyson, that will depend on how he does in his next few fights.

Biggest Loser: Fedor Emelianenko/M-1 Global
Fedor almost seemed relieved to be free from the pressure that comes with his stellar record and his status as a legend. M-1, which has been profiting handsomely from both, is probably far less comforted by the loss. If he can come back stronger this will only be a footnote in a great career. If he can't, he'll be known as the demi-god who became human all at once. The flack he's catching now and the sudden rankings drop, that's to be expected given the incredible praise that was heaped on him before this loss. As the saying goes: the higher a monkey climbs, the more we see of his behind.

Most Terrifying: Cristiane "Cyborg" Santos
If the Pride-era Wanderlei Silva had been born a woman, one gets the sense that woman would have been Santos. She has little regard for strategy – or, for that matter, defense – but her hyper-aggressive attack is so effective, it doesn't matter. She's not so hard to hit if you're willing to stand and exchange with her. But who in their right mind would want to do that?

Most Bizarre Post-Fight Obsession: Cung Le
After TKO-ing Scott Smith, Le marched out of the arena shouting, 'Pizza and cookies!' It's great to have something motivating your training, but seriously? Pizza and cookies? Is this a pro fighter we're talking about, or a ten year-old whose parents have left him home alone for the weekend?

Most in Need of a Hug: Scott Smith
It's always to depressing to sit on press row and watch the losing fighter go shuffling past on his way to the locker room. It's only more depressing when the losing fighter is as nice a guy as Smith. You just want to reach out and give him a hug, if only you didn't think he might punch you just out of reflex.

Most Impressive in Defeat: Pat Healy
In a fight that wasn't supposed to be terribly close, Healy turned it into a grind, much like his coach Matt Lindland is known for doing. Before he succumbed to the choke, Healy was even with Thomson on my scorecard, at least. That probably doesn't make feel too much better this week, but at least there's reason to think he'll be back in the future.

Gutsiest Performance of the Night: Jan Finney
Honestly, I expected her to be a punching bag for Santos. What I didn't expect was that she'd be one that hit back, or one that could stand up to the punishment for so long. For that, Finney deserves a lot of credit. You just have to wonder if it was enough for Strikeforce to consider using her again, or if she's a disposable punching bag in their eyes.

Best Self-Narrated Send-Off: Frank Shamrock
Shamrock has never been shy when asked to share his opinions on his own greatness. That's why it was oddly fitting for him to narrate his own highlight video before announcing his retirement. Whenever possible, it's always nice to have a fighter sent off into retirement with kind words from his biggest fan. I kid Shamrock, of course. The truth is that he really was a pioneer of the sport, and kudos to him for knowing when it's time to walk away. His speech in the cage was genuinely touching to those of us who still remember his bout with Tito Ortiz as the dawning of a new era for MMA both in technique and spirit. The fighters of today may not even realize the debt they owe him. Though if that's the case, they should just ask him. Lord knows he won't mind telling them all about it.