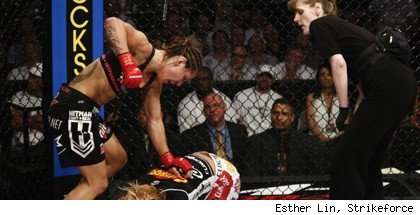 Cris Cyborg's second-round TKO win over Jan Finney on Saturday night was terribly one-sided and a little sloppy, and not a great fight. But both fighters -- as well as the third woman in the ring, referee Kim Winslow -- did their jobs to the best of their abilities on Saturday night and deserve credit, not the scorn they've received in some quarters.

Cyborg, of course, showed once again why most MMA observers consider her the best female fighter in the world. Since bursting onto the American MMA scene with EliteXC two years ago, she's 6-0 and has dominated all six opponents.

But Cyborg notching another big win is the obvious part. We shouldn't forget to mention that Finney showed a lot of heart and determination in refusing to quit against Cyborg, and that Finney was actually somewhat effective in the stand-up. Finney landed a hard right hand in the opening seconds of the fight, and did it a few more times as the fight went on. Finney exposed some holes in Cyborg's defense that a better striker might be able to take advantage of in the future.

I also loved Finney's attitude toward the fight, as expressed in posts on Facebook the next day.

"I went out there and gave it everything I had and I was stopped, but there is something in me saying I want to fight Cyborg again," Finney wrote. "This is no disrespect to Cyborg. She is the champ, but something in my gut is just saying: sometimes the weak beat the strong, sometimes the slow beat the fast... I want to fight Cyborg again, she is the best.... but I want another shot! I know I need to earn that shot and that is what I am going to do."

No, Finney isn't going to get a rematch with Cyborg. But give her credit for wanting one.

And then there's Winslow, who was questioned by play-by-play man Gus Johnson during the fight, and by many fans and members of the media after it, for not stopping the fight sooner. Winslow actually did a great job in this fight, both with the timing of the stoppage and with the decision to first warn Cyborg, and then take a point away, when Cyborg repeatedly hit Finney in the back of the head.

Early in the second round, with Cyborg on top of Finney and hitting her repeatedly, Johnson said, "This is brutal. Kim Winslow has to stop this fight."

Johnson was wrong. Just as Johnson was saying that, Winslow told Finney, "Fight back, Jan." That -- not stopping the fight -- was the correct course of action. Although Cyborg was beating her badly, Finney was conscious and alert, doing her best to defend herself, and able to hear a referee's instructions. In fact, Finney even attempted a knee bar 30 seconds after Johnson said the fight should have been stopped.

It wasn't until more than two minutes later, when Cyborg landed a knee to Finney's ribs and caused Finney to crumple to the ground and grab her side, leaving her head exposed, that Winslow made the correct decision to stop the fight. Finney earned those two extra minutes in the cage with Cyborg, and it would have been wrong for Winslow to take those two minutes away from her, just because Johnson didn't like the mismatch he was seeing.

It absolutely was a mismatch, but if you have a problem with that, your problem is with Strikeforce and Showtime for not finding Cyborg a better opponent, and not with any of the three women in the cage Saturday night. They all did exactly what they were supposed to do.