Where Does Werdum's Stunner Over Fedor Fall on All-Time Upsets List? 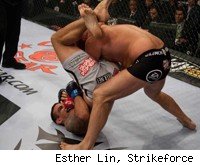 Any time a monumental upset takes place in mixed martial arts, it's pretty much mandatory to start up the discussion about where the fight falls on the list of biggest upsets of all time.

With Fabricio Werdum's Strikeforce win over Fedor Emelianenko on Saturday, the debate began as soon as the shock of seeing Fedor tapping out wore off: Was this the biggest upset in the history of the sport?

This is just one Top 10 list. Yours will likely differ in inclusions, snubs and placement. There have, of course, been plenty of other notable upsets beyond this set, some of which are listed here as Honorable Mentions. But like unofficial pound-for-pound lists, big upsets like Werdum over Fedor are a part of what keeps MMA fans debating. So let the discussion begin.


Share There will be plenty of critics who say this fight has no business being on a Top 10 MMA upsets list. It was marred in controversy, accusations and official investigations both before and after the fight. And especially after Kimbo's recent release from the UFC, most still consider him more freak show than true mixed martial artist. Say what you will, but Petruzelli still took the fight on literally hours notice after Ken Shamrock was cut warming up and couldn't go on as planned. The bout was the main event on a nationally televised CBS card, putting it front of plenty of watchful eyes, and Kimbo was already one of the most recognizable names in the sport. He had demolished his first two EliteXC opponents, Bo Cantrell and Tank Abbott, and left James Thompson a horrifically bloody mess after exploding his cauliflower ear. The consensus was that Petruzelli was a proverbial lamb to the slaughter. Kimbo came out quickly, looking to maul. But Petruzelli stunned him with a jab, dropped him to his knees, then finished the fight by pounding Kimbo out in front of his South Florida home crowd – in just 14 seconds. EliteXC filed for bankruptcy less than a month later, and Petruzelli's upset of the promotion's poster boy is widely attributed to that downfall.

9. Randy Couture over Tim Sylvia
UFC 68: The Uprising | March 3, 2007
Couture retired after losing to Chuck Liddell for the second straight time, completing the pair's famous trilogy at UFC 57. But that retirement would last just 13 months. At 43, Couture returned to the UFC to face Sylvia for the heavyweight title he had defended twice already with wins over Andrei Arlovski and Jeff Monson. A year away from the cage, a significant age difference and, most importantly, a significant size difference against the 6-foot-8 Sylvia made Couture an underdog on many levels. But just eight seconds in, Couture dropped Slyvia and cruised the rest of the way, dominating the champion in every facet of the game en route to a unanimous 50-45 sweep, furthering his Hall of Fame legend status.

8. Joe Lauzon over Jens Pulver
UFC 63: Hughes vs. Penn | Sept. 23, 2006
After leaving the UFC more than four and a half years earlier, Pulver, the organization's first lightweight champion, returned after going 9-4 outside the Octagon. The UFC had brought back the lightweight division and Pulver was expected to be a top contender for a run at the title. But Lauzon, who was little known outside his native Massachusetts, had something to say about that. He had been busy, fighting 16 times in 26 months when he got the call from the UFC to face Pulver. And he came in as a 7 to 1 underdog. A submission specialist, 11 of Lauzon's 13 wins going into the fight were from tapouts. Lauzon shot early for a successful takedown, giving an indication that he might not want to stand and trade with Pulver. But back on the feet, he threw a knee to the chin that was followed by a vicious left that put Pulver out in just 47 seconds. The loss was the first of seven for Pulver in his next eight fights.

7. Daiju Takase over Anderson Silva
Pride 26: Bad to the Bone | June 8, 2003
Silva had breezed through nine straight fights, including three straight in Pride, when he was matched up with the 4-7-1 Takase. Silva was an 8 to 1 favorite in the bout and was expected to essentially win in a walk-through. But a minute in, Takase got the fight to the ground, where he could avoid Silva's precision striking. Working from the top, Takase went for several submissions, including armbars and side chokes. When Silva finally worked back to his feet after more than seven minutes on his back, Takase pulled off a triangle choke that forced Silva to tap. Silva has gone 17-2 since that loss (with a loss to Yushin Okami from a DQ), including an amazing 11 straight in the UFC. Takase returned to mediocrity, losing two straight and six of his next eight.

6. BJ Penn over Matt Hughes
UFC 46: Supernatural | Jan. 31, 2004
With 13 straight wins and five straight defenses of the UFC welterweight title, Hughes had already positioned himself as an all-time great. The fact that Penn was moving up from lightweight to fight Hughes at welterweight seemed to put him at even more of a disadvantage. And Hughes had more than four times as many fights as the 7-1-1 Penn. But short of an opening left jab, Hughes was in defensive mode the entire fight on his back after working for an early takedown that he couldn't secure. Four minutes into the fight, Penn postured up and landed a big right. Soon after, he had Hughes mounted, then took his back to lock in a fight-ending rear-naked choke. Before the fight, Hughes said he believed it was a sign of disrespect that Penn was moving up a class to fight him. But after the loss, he told Penn, "I never underestimated you." Penn was on his way to becoming one of the best in the sport before the fight with Hughes, but his dominant win made him a permanent fixture in the discussion from there on out. 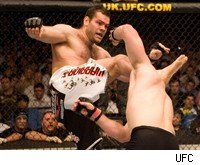 5. Gabriel Gonzaga over Mirko "Cro Cop" Filipovic
UFC 70: Nations Collide | April 21, 2007
Cro Cop was the UFC's highest profile signee from Pride and had built a reputation for finishing fights with thundering kicks to the head. At 22-4, his losses were to Antonio Rodrigo Nogueira, Kevin Randleman, Fedor and Mark Hunt – not too shabby. He breezed through his UFC debut against Eddie Sanchez, and most expected the same thing against Gonzaga, which would lead to a title shot against Randy Couture. He entered a 5 to 1 favorite. But in the very definition of irony, it was Gonzaga who delivered a kick to Cro Cop's head, knocking him out instantly late in the first round. The knockout would become a highlight reel moment for the ages, and most believe Cro Cop has not been the same fighter since the loss.

4. Forrest Griffin over Mauricio "Shogun" Rua
UFC 76: Knockout | Sept. 22, 2007
In Shogun's UFC debut after Zuffa's purchase of Pride, he came in a -500 favorite. Most had him ranked as the top light heavyweight in the world. Griffin was 4-2 after winning Season 1 of "The Ultimate Fighter," but with losses to Tito Ortiz and Keith Jardine, he hadn't yet proved he could win against top-shelf competition. He was relentless, though, against Rua, who appeared gassed almost from the get-go – widely attributed to an inability to properly train following surgery. Griffin dominated the entire fight before locking in a rear-naked choke late in the third that Rua was too fatigued to fight off.

3. Rameau Thierry Sokoudjou over Antonio Rogerio Nogueira
Pride 33: The Second Coming | Feb. 24, 2007
Nogueira, twin brother to Antonio Rodrigo Nogueira, came in with a 7-1 Pride record; Sokoudjou was making his Pride debut and was just 2-1. Sokoudjou was a massive underdog, as much as 16 to 1. "Little Nog" was highly touted for his boxing skills – he was a Brazilian national amateur champ who would go on to win a bronze at the Pan Am Games later in 2007. But ironically, it was vintage boxing that sent him to the canvas. After working head kicks, Sokoudjou dropped Nogueira with a stiff left uppercut to the jaw. He landed another shot on the ground before the ref could stop it after just 23 seconds. Sokoudjou's career has been up and down since then, going 5-5 and bouncing between Pride, the UFC, Affliction, Dream and Strikeforce, among others. Little Nog, on the other hand, hasn't lost since then (though many say his split decision win over Jason Brilz at UFC 114 should have gone the other way).

2. Fabricio Werdum over Fedor Emelianenko
Strikeforce: Fedor vs. Werdum | June 26, 2010
There are very few superlatives that haven't been bestowed upon Fedor. By the vast majority of accounts, he was either the best heavyweight of all time, the best pound-for-pound fighter of all time or both. And by many accounts, he still will be after his shocking loss on Saturday. Fedor's only career loss was against Tsuyoshi Kohsaka in a Rings event nearly 10 years ago – and it was only a loss because of a cut caused by an illegal elbow. Because the fight was in a tournament, there was no choice but to rule it a loss and not a no contest. It was the one giant asterisk that Fedor brought with him, and most fans and analysts acknowledged he had never truly lost a fight. He entered a -625 favorite to Werdum's +425 on Saturday. Most believed Werdum's one shot at victory was on the ground, where he could put his BJJ skills to work. After Fedor opened with the heavy hands he's known for 25 seconds in, he followed Werdum to the canvas and into his guard – and that mistake would be his downfall. Werdum immediately began working for an armbar. And though Fedor squirmed out initially, Werdum kept the pressure on, quickly securing a triangle choke to go along with a straight armbar. After just 1:09, Fedor was tapping for the first time in his legendary career. 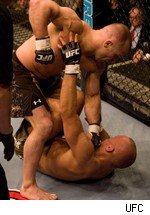 1. Matt Serra over Georges St-Pierre
UFC 69: Shootout | April 7, 2007
While Fedor's loss on Saturday comes close to No. 1, Serra over GSP still reigns supreme. St-Pierre came into the fight a massive -1300 favorite. Serra was only getting a shot at the welterweight title because he won Season 4 of "The Ultimate Fighter," which many fans and reporters chalked up to little more than a gimmick considering all the contestants that season had their shots at the UFC previously, but hadn't cut the mustard to stick around. Serra had gone 4-4 in the UFC before winning "The Comeback" season of TUF, but his victory in the finals was a split decision win over Chris Lytle – nothing special, to be certain. GSP was expected to walk right through Serra, a Brazilian jiu-jitsu black belt. Serra had none of it, keeping a consistent barrage of GSP kicks at bay before staggering him with a left – and he never gave the champ a chance to recover, connecting with strikes that took St-Pierre's legs out from under him. He pounced and finished with ground-and-pound, doing what perhaps just he and his camp thought possible – winning the UFC welterweight title. After the fight, Serra said the win might be the biggest upset in UFC history. But many consider it the biggest upset of all time. St-Pierre regrouped from the loss and has never looked back, winning seven straight in dominating fashion, including his rematch with Serra.