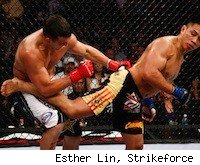 The tally may be even at one win apiece for Scott Smith and Cung Le after Le's second-round TKO victory at Strikeforce: Fedor vs. Werdum, but that doesn't necessarily mean they'll be meeting for a third bout any time soon, Strikeforce CEO Scott Coker said.

Responding to questions about whether a rubber match was guaranteed, as Smith's manager, Mike Roberts, seemed to think was the case when he spoke with Sherdog.com before the bout, Coker said it might be a consideration eventually, but it's by no means assured.

"We've had that conversation," Coker said. "These guys, it was an amazing fight. Both fights were amazing fights. I think if they fought every weekend it would be amazing fights every weekend, like the Gatti-Ward fight, just those epic battles. When I think of Scott and Cung that's what I think of. But there hasn't been anything decided. I didn't make that commitment to Scott or to Mike, actually.

"It's something that, as their careers go down the line, maybe there should be a rubber match at some point. We did have a conversation, but there wasn't any commitment. It could happen. Certainly it could happen after another fight or two, but I think we're going to be getting into the tournament business and we have another path to take."

While it's been rumored that the winner of this fight would gain entry into that upcoming Strikeforce middleweight tournament, Le remained non-committal about whether he would participate in it.

"I haven't had a chance to think past this fight to any tournament. It's been a rough week for me. I just had a baby boy. My wife was in labor for 14 hours and she had an emergency C-section because the cord was wrapped around the neck, so her being in the operating room on Monday, it was very draining. I was exhausted until, like, Thursday. I just dug deep and went in here, I knew I was in shape, and I got about four or five hours of sleep yesterday, so it had been a rough week."

- Up next for Cristiane "Cyborg" Santos will most likely be Erin Toughill (10-2-1), according to Coker, who said his team has been "trying to put that fight together," in addition to arranging women's tournaments in the 135-pound and 145-pound divisions.

- Santos commented afterward that she thought her bout with Jan Finney should have been stopped earlier, but that she was prepared to go for as long as it took to put Finney away.

- Fabricio Werdum credited his win to a special modified armbar/triangle choke that he said he would show "at the next seminar," which he claimed would be only ten dollars to attend. He also noted that his wife didn't see his win over Fedor Emelianenko since she never watches his fights, but instead goes to the supermarket during his bouts.

- When asked about the effect of Fedor's punches early in the fight, Werdum responded, "Fedor hit me?" This got a laugh from the room, but Werdum insisted that he genuinely didn't remember. "This is serious...maybe his punches affect[ed] my [memory]."

- Josh Thomson said he'd already had an X-ray in the HP Pavilion after his win over Pat Healy, and that a takedown very early on the first round had broken two of his ribs. At one point during the fight, Thomson said, he looked out over the crowd and began "wondering what the hell I was doing." He said he saw his career flashing before his eyes and couldn't understand why he was losing the fight. "My corner just told me you need to go out there and get it done."