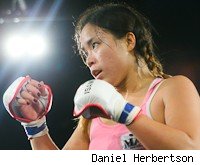 Leading Women's MMA promoter Jewels have revealed seven of the eight fighters for the opening round of their 115-pound tournament to be held on July 31st at Shinjuku Face.

Competing to be the first Queen of Jewels' lightweight division will be established stars Seo Hee Ham, Mika Nagano and Saori Ishioka. Prospects Sakura Nomura, Ayaka Hamazaki, Celine Haga and Mai Ichii along with one fighter who is yet to be announced will round out the tournament.

Seo Hee Ham holds a 4-3 record but those three losses come to Megumi Fujii, Yuka Tsuji and Miku Matsumoto, three of the best in the lightweight division. Ham holds strong victories over Saroi Ishioka and incredibly took out Hisae Watanabe in her debut. She possesses technically good and powerful striking, and if she has been working on her submission defense, she should get her record back on track to reflect her true skills.

Mika Nagano was riding a five-fight winning streak going into her bout with Celine Haga in May but unfortunately for Nagano she ran into a possessed fighter who was desperate for a win and ended up getting dominated on the feet and on the ground. Nagano was mentally broken after the Haga fight and collapsed in tears as soon as the final bell sounded. She will look to regain some mental strength here and with her wrestling credentials she matches up with well with many of the strikers in this tournament.

Jewels poster girl Saori Ishioka has improved as a mixed martial artist in her last few bouts, adding grappling to her already dangerous karate background. The two-time All-Japan Karate champ has rebounded from a competitive loss to Megumi Fujii with a pair of armbar victories of Sally Krumdiack and Mai Ichii. Ishioka will be one of the favorites for the tournament.

Celine Haga got off to a disastrous 0-4 start to her career but finally in her last bout with fellow tournament entrant Mika Nagano, her training with Joachim Hansen and Kazuyuki Miyata paid off. Haga was dominant from start to finish against the highly favored Nagano and with that win earned herself a spot in this tournament.

Training alongside Miku Matsumoto at Club Barbarian, Sakura Nomura is 2-0 and has physical strength that is rarely seen at this weight in Women's MMA. Like some of the other less experienced fighters in this tournament, Nomura may need more experience before she is ready for Ham, Nagano or Ishioka but as long as she doesn't draw one of those fighters in the first round she may be a dark horse.

Pro Wrestler Mai Ichii, like Seo Hee Ham, is another fighter who has been thrown in with some of the best early on in her career and she has come out with a 3-3 record. She has lost her two bouts in 2010 to Saori Ishioka and Mika Nagano but her 2008 victory of Sakoto Shinashi is more telling of her potential. A fighter with no distinct technical strengths or weaknesses, Ichii will rely on heart and conditioning to get her through this tournament but may be outclassed here.

Megumi Fujii trained Ayaka Hamazaki at 1-0 is a wild card in the tournament and with her strength and grappling prowess she may have some success but this tournament will feature some of Japan's best and she may run into a test to big too early on.