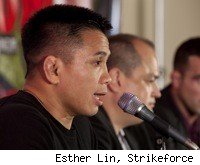 Both Cung Le and Scott Smith met with the press following their rematch Saturday night, which was won by Le via second round TKO.

Smith talked about wanting to get another shot at Le, who he beat in December, while Le discussed his game plan going into the rematch, his mind set going into this fight after his son was born with complications earlier this week and what the future holds for the former middleweight champion.

Watch highlights of the press conference below.