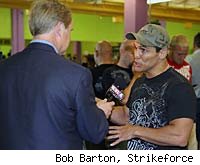 The legendary mixed martial artist Frank Shamrock announced on Saturday night that he is retiring from fighting.

"I'm 37 years old now and my time has come," Shamrock said. "Tonight I announce my retirement and I say this will be the last time I walk into this cage as a fighter."

The 37-year-old Shamrock is one of the sport's all-time great fighters, and one of the first to understand the importance of being well-rounded in all facets of the game, rather than just being a specialist at striking or wrestling or jiu jitsu. Shamrock won the UFC middleweight championship in 1997 and defended it four times. He retired from the UFC after beating Tito Ortiz in 1999, in one of the sport's all-time classic fights, and although he never fought for the UFC again, he did come out of retirement multiple times in the last decade, winning the WEC light heavyweight championship and the Strikeforce middleweight championship along the way.

Shamrock has long feuded with his adopted brother and fellow MMA legend Ken Shamrock, but the first person Frank mentioned Saturday night was Ken, noting that his brother had taught him the sport. There was talk that Ken and Frank would engage in a Shamrock vs. Shamrock fight before they retired, but instead Frank is walking away from the sport, saying he's accomplished all he wanted to accomplish.

"It was an honor," Shamrock said, "to bleed for you, to break my bones for you, and to entertain you."