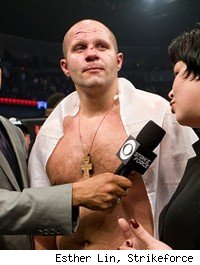 Emelianenko himself says there's nothing to it. But there's no doubt about it: Of Emelianenko's last eight opponents, not a single one has notched a significant victory since losing to Fedor. You have to go all the way back to Fedor's victory over Mirko Cro Cop almost five years ago to find anyone who has accomplished much of anything in the ring or cage after fighting Fedor.

Here are Fedor's last eight opponents, and their records since fighting Fedor:

That's a few mediocre wins mixed in with a lot of ugly losses. The best post-Fedor win of any of Fedor's last eight opponents was probably Mark Coleman beating Stephan Bonnar at UFC 100.

More Coverage: Fedor vs. Werdum Results | Fedor vs. Werdum Pictures | Strikeforce
So what's it all about? In a call to promote his upcoming fight with Fabricio Werdum, Fedor was asked by Beau Dure of USA Today (who has written about the trend) why his opponents can't get past losing to him and get on with their careers. Fedor didn't have much of an explanation.

"In my experience most of the fighters I have fought have trained very well for me, training mentally and physically," Fedor said. "As far as what happens to fighters who have fought with me in the past, I don't think there's any mystery, magic or mystique to it. Every person is different in how they handle defeat and how they continue their fighting careers."

I'm not sure that this is quite as much of a trend as it might appear: Zuluzinho and Choi were booked more as freak shows than as real fights, so it's no surprise that those guys haven't had stellar careers since fighting Fedor. Coleman, Hunt and Lindland were all already on the down sides of their careers, and it's no surprise that as they got older they didn't get any better. And in the case of Arlovski and Rogers, I think they just lost to better opponents: Overeem is clearly better than Rogers, and Rogers and Silva are both at least arguably better than Arlovski.

That leaves us with Sylvia, who showed up fat and out of shape and stood right in front of a hard-hitting boxer in Mercer, who knocked him cold just seconds into their fight. Sylvia may have been discouraged by his loss to Fedor, or he may have lacked motivation to train after cashing the biggest paycheck of his career when he fought Fedor. But when you really look at what Fedor's opponents have done after fighting him, that result is the only one that looks out of place. In the other cases, the fates of the men who fought Fedor really don't seem to have been influenced by Fedor himself.