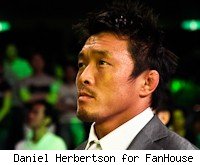 Yoshihiro Akiyama's management has told MMAFighting.com that the Japanese/Korean fighter is still not sure if he will be fighting Wanderlei Silva's replacement, Chris Leben.

Akiyama was scheduled to hold a press conference at Narita Airport in Japan prior to his departure tomorrow but only hours ago Akiyama's manager told MMAFighting.com that he is not 100% on whether Akiyama will make the trip to Vegas. Akiyama has reportedly been suffering from depression ever since Silva's injury was announced and has not trained for the past week.

Update: Akiyama has since updated his blog. "I had various choices but ... I'll do my best in my fight!"

Akiyama expressed disappointment in Silva's replacement to Korean website Daum.net, stating that he did not consider Leben a high-profile opponent and has said that his motivation has has been low ever since the change was announced.

Akiyama made his promotional debut at UFC 100 against Alan Belcher where he took a split decision that won fight of the night honors. Akiyama has not fought since and has consistently pushed for a fight with Silva following that victory. He was expected to fight Silva at UFC 110 in Australia but Michael Bisping was instead announced. After Silva's victory over Bisping, the Brazilian publicly expressed his desire to fight Akiyama.

Silva was forced to withdraw from the Akiyama after suffering three broken ribs and a knee injury during training.

Akiyama is expected to make a decision as to whether or not he will fight Leben over the next 12 hours.