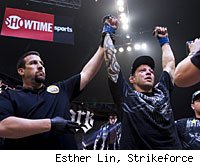 SAN JOSE, Calif. -- This recurring feature sounded like such a good idea in my head. What's not to like about an MMA fighter and an MMA writer matching wits over an upcoming fight card? That was before I went 0-2 in the first two installments, dropping very close match-ups with Cain Velasquez and then Tim Kennedy.

But this time I'm trying something different in the hopes of changing my luck. For Strikeforce: Fedor vs. Werdum, I square off against Renato "Babalu" Sobral in a special video edition of Writer vs. Fighter, and I have to say I feel good about this one. Maybe it's the fact that Sobral is essentially obligated to pick his Brazilian brother-in-arms Fabricio Werdum to pull off the upset over Fedor Emelianenko, or maybe it's just that I don't have to do as much actual writing for this one.

Whatever it is, I feel almost certain that I'm going to win this one. Or, you know, at least save some dignity with a tie. Check out the full video below to find out how "Babalu" and I see Saturday night's action going down.