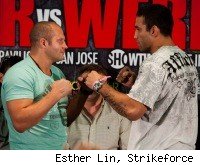 All month long, the narrative about Saturday's Strikeforce/M1: Fedor vs. Werdum show has had little to do with the main event. Instead, it's been about whether Fedor Emelianenko is soon to retire, his thoughts on the UFC, why he's not fighting Alistair Overeem. Anything, it seems, but Fabricio Werdum.

You could probably chalk up the phenomenon to the fact that most people simply don't believe that Werdum is going to be the one to end Emelianenko's nine-and-a-half-year unbeaten stretch. Most people will simply watch to find out how Fedor wins. Will it be a KO? A submission? Will Werdum be able to last the distance?

To make it clear, I'm not going to be the one to pick against Emelianenko. You don't pick against men in the midst of historic win streaks. But I do see a path to victory for Werdum, as remote as it may seem.

In some ways, Werdum (13-4-1) is exactly the type of fighter who may one day end Fedor's run. He's strong and rugged. He has top-level jiu-jitsu including excellent positional control. And perhaps most importantly, he's not going to go out and try to be a hero. He knows what he's good at, he's learned lessons from past losses, and he's not going to engage in a firefight against a man possessing two hand cannons.

More Coverage: Fedor vs. Werdum Results | Fedor vs. Werdum Pictures | Strikeforce
Because Emelianenko (32-1-1, 1 no contest) has advantages in both hand speed and power, Werdum has to keep him close, negate those two edges by initiating the clinch and trying to push him up against the cage with little room to work. Either that or he needs to put Fedor on the mat early and often. That's no easy feat as Emelianenko has always had very good balance and underrated takedown defense. Yet he has been taken down in the past, and Werdum needs to make an effort to put him on his back. In the fight most often cited as the blueprint for beating Fedor, Ricardo Arona took him down repeatedly and attacked with submissions throughout much of the bout. Yes, that fight was forever ago, but that does not mean the lesson no longer applies.

Share While Emelianenko has a strong ground game from the bottom that stems from his constant movement and loose hips, Werdum might have the bulk and experience to hold him there and grind out a methodical decision. While that doesn't sound so appealing to watch, it's the smart play. But if Werdum finds himself in the position, he also knows that Emelianenko has been cut-prone in the past, so he's got to take advantage of whatever time he has on top to affect the outcome.

That said, this type of grinding match seems to be Werdum's only real chance at winning, and he's going to need the stars to align perfectly to pull it off.

On the feet, Emelianenko should have a big advantage. While not a textbook puncher, his strikes are wildly effective because of their speed and accuracy. He's always flashed some serious one-punch power as well, as people like Brett Rogers and Andrei Arlovski can attest to.

Emelianenko does not spend too much time on his back, but even there, he's a threat, always looking for submissions and sweeps. But if he takes you down, watch out. His ground-and-pound has historically been some of the most effective ever seen in MMA. According to Compustrike, over his last eight bouts, he's connected at a 57 percent rate on ground strikes, which is a high number when you take into account that Emelianenko is much more likely than most fighters to throw devastating overhands from the top rather than looking for strategic blows to soften up his opponent.

Even given Werdum's credentials as a two-time ADCC world champion grappler, it's unlikely he'll be the first one to sub Emelianenko from the bottom. Fedor's been locked in combat with other Brazilian jiu-jitsu black belts before -- including the aforementioned Arona as well as Antonio Rodrigo Nogueira -- with few problems. Then again, it has been a while since he's faced a real submission wiz, so it may be a more interesting cat-and-mouse than we'd otherwise think.

I don't expect Werdum to get blown out early. Aside from his Oct. 2008 whitewashing at the hands of then little-known Junior Dos Santos, he's proven himself to be a game and credible fighter. It remains the only time in 18 pro fights he's been finished.

Furthermore, Werdum understands the opportunity in front of him. He's been toiling in the MMA world for almost a decade and has never had an opportunity at a major championship or a run at the spotlight. While no title is at stake, Werdum knows a win over Emelianenko would send shockwaves through the MMA world. Whether or not he goes on to win any major title, this could be the defining match of his life, a moment to either crack under the pressure or shine. I believe he'll represent himself well in the fight of his career.

In the end though, I can't bring myself to pick against Emelianenko, a man who seemingly does not know how to lose. If he fights long enough, it is bound to happen, but Saturday is unlikely to be the day. His hands are too fast and powerful, he's too strong and savvy to stay on his back too long, and he's simply too good. Emelianenko via third-round TKO.