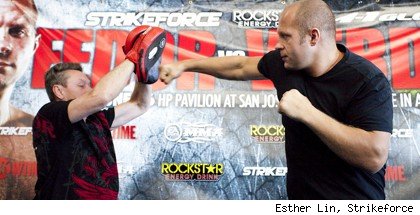 There's a lot to like about Saturday night's Strikeforce/M-1 Global card in San Jose, but the fundamental fact that makes the show compelling is that the best fighter in the history of MMA, Fedor Emelianenko, is returning to the cage. We've got the full preview and predictions for Fedor's fight and the other three Showtime bouts below.

What: Strikeforce: Fedor vs. Werdum

When: The Showtime televised card starts at 10 PM ET.

Fedor Emelianenko vs. Fabricio Werdum
Werdum is good. I consider him one of the Top 10 heavyweights in mixed martial arts, and he's undeniably one of the best Brazilian jiu-jitsu practitioners in the world -- maybe the very best. On the ground, Werdum is a threat to anyone. But Fedor is Fedor, he's the best heavyweight in the world and the best fighter of all time, and although someone will probably best him eventually, there's no reason to believe Werdum will be that someone.I like Fedor to win by second-round TKO.
Pick: Emelianenko

More Coverage: Fedor vs. Werdum Results | Fedor vs. Werdum Pictures | Strikeforce
Cris Cyborg vs. Jan Finney
Cyborg is the world's best female fighter, but Strikeforce is having trouble finding credible opponents for her. Finney, who's on a four-fight winning streak, isn't a bad fighter, but she's not in Cyborg's class. It's almost impossible to see a way Finney wins this fight, and the biggest question is whether Cyborg will put on a spectacular show and finish Finney quickly, or whether she'll toy with Finney for 25 minutes.
Pick: Cyborg

Cung Le vs. Scott Smith
This is a rematch of a very fun fight from December, when Le battered Smith around for two rounds only to get knocked out himself in the third. Smith has a history of putting on that kind of spectacular finish, and this fight is sure to be a lot of fun because of the two fighters' styles, but I think this time around Le is going to be a little more cautious and a little less likely to get caught by one of Smith's hard punches, and he should get the win.
Pick: Le

Josh Thomson vs. Pat Healy
Healy has been around a long time and beaten some quality opponents, including Carlos Condit, Paul Daley and Dan Hardy. I don't think he matches up very well with Thomson, though, and I like Thomson to take this fight as he marches toward an inevitable rubber match with Strikeforce lightweight champion Gilbert Melendez.
Pick: Thomson