Kenny Florian Scoffs at the Idea of Cris Cyborg Losing 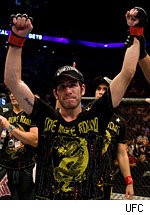 UFC lightweight Kenny Florian is rapidly turning into one of the best analysts in mixed martial arts. Over the weekend he called both the Ultimate Fighter Finale on Spike and WEC 49 on Versus, and in both broadcasts he showed off his technical knowledge of MMA as well as an ability to clearly articulate the strengths and weaknesses of the fighters he was watching.

But Florian, who also works as an analyst on ESPN's MMA Live, found a subject this week that he couldn't explore in any real depth: Saturday night's fight between Cris Cyborg and Jan Finney.

Florian just laughed when asked to break down that fight.

"Do we need to talk about that fight? I mean, Jan Finney is, you know -- she's a tough girl but she's going against Cyborg," Florian said. "I don't think there's any woman on the planet who can beat Cyborg, all the way up to 250 pounds."

Florian's comments point to one of the fundamental problems Strikeforce has in promoting Cyborg: There just aren't any women out there who are seen as credible opponents for her. That's both a testament to Cyborg's greatness and a reason to be concerned about what the future holds for her, and for Strikeforce's 145-pound women's division.